Champions of the World

When in Rome, do as the Romans do - build straight roads. When in New Zealand, watching the All Blacks is a non-negotiable!

With that in mind, we decided to venture to Hamilton for the weekend to spend some much needed time in the van and to witness the pinnacle of rugby in action. Saturday would see the All Blacks come up against Tonga in their final test match before they head off to Japan. The much anticipated 2019 Rugby World Cup could spell a record third consecutive win for New Zealand, making them the greatest team in the history of the game. With the 33 strong squad chosen just days in before, this was a game not to be missed!

On the Friday, we hit the road. We had decided to stick to all-things-Rugby and opted to stay in the very first campsite of our long travels back in March - Onewhero Rugby Club. This served as a brilliant reminder of why we simply have to get back on the road soon, and also a good reminder of just how difficult it is to live in a van when the weather lets you down. Rain was predicted for the whole weekend- foreboding when your activities of choice are camping and watching outdoor sports, but we persevered anyway. We’ve been working (and saving) solidly for two months so a weekend away was very much in order - a little thunder and lightening wasn’t going to stop us!

To help weather the storm, we decided to relive the glory days and have a cosy night in the van with some good food and wine. I must confess - I chose the wine for the occasion and it was HORRIBLE. I bring this up before Jane does, as she's about to take over this chapter as part of our rigorous editing process. I’m not really sure what happened. I used our fool-proof method of choosing a bottle with a cute animal on it - this one was a horse. Something went terribly wrong and the wine tasted of marzipan and glace cherries. It was awful and I'm sorry!

To my relief, Saturday morning was beautiful. For a bit. We had a very lazy breakfast in the sun and even broke out the shades and factor 50. Content with our slow morning, we decided to leave later than planned in order to soak up the rays and enjoy the van-life for a little longer. A little too long actually. The second I made any attempts to get ready (walk across the field to brush my teeth), it rained sideways. This was the type of rain where the droplets pretty much join up so you can't see between them. Given that we had standing 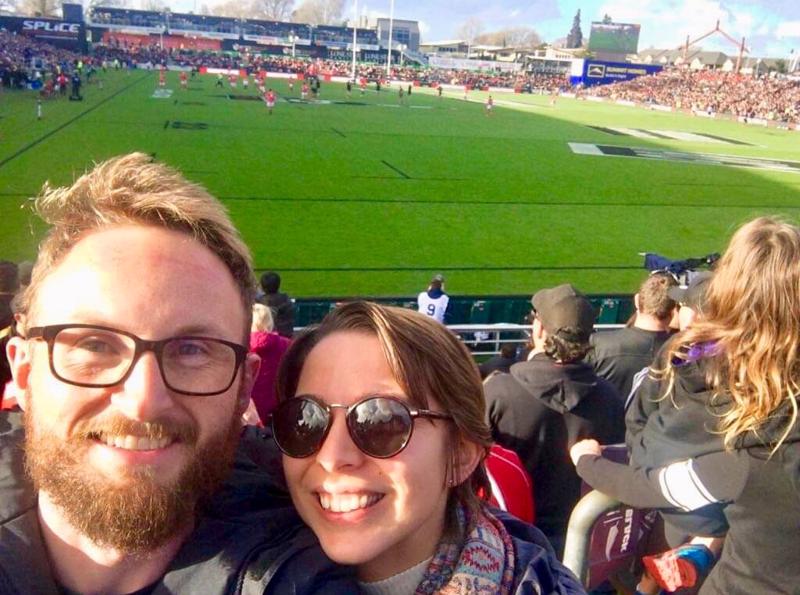 tickets for the game, in an uncovered area - this was more than a little concerning! Nevertheless, we headed down to Hamilton and by the time we made it, we were rewarded with glorious sunshine. I had planned to curb my obsession with meteorological conversation when we left Britain but it's difficult here as it changes every eight seconds.

We found a parking spot and walked down to the game in the sunshine. On arrival we were shepherded into the cheap seats but discovered that we had a marvelous view! The embankment is unreserved, so you can stand anywhere you like. The area is spacious and, like a Roman amphitheatre, staggered giving you a great view of the game at pitch level. When in Rome etc. Our morning antics had meant that we missed the curtain-raiser but still made it for the pre-match entertainment in the form of NZ Music 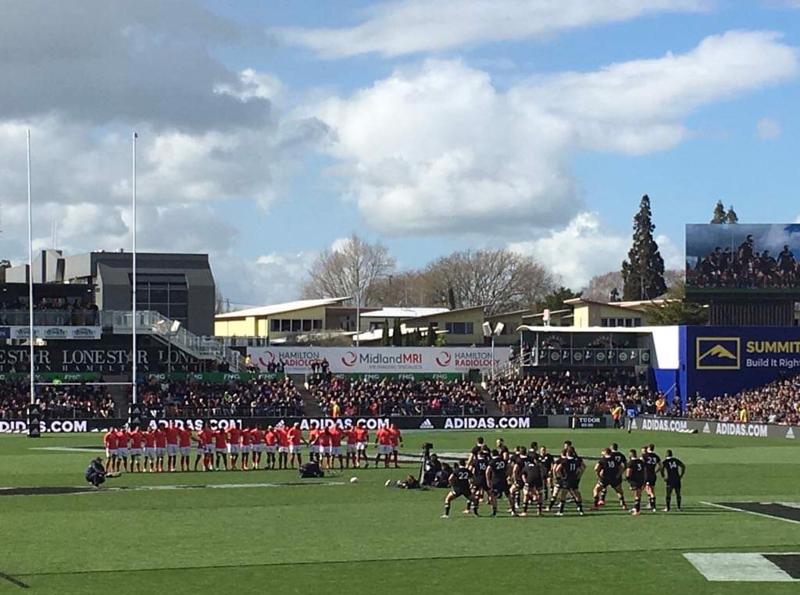 Awards and Waiata Māori Music Awards winner, Troy Kingi. Troy is a real talent and fabulously groovy. He put on a great show (which must be difficult when playing on a floating platform in the middle of a rugby field) and was only upstaged by the All Black's Haka and Tonga's Sipi Tau. Both were phenomenal. Such volume from such small humans (they are actually all massive). A really impressive and spiritual event that we'll be seeing a lot more of in the World Cup!

The game itself was even more one sided than our beloved Roosters' dismantling the previous week, ending 92-7 to the All Blacks. 14 tries in total - a real feast of running rugby and a testament to the power of the All Blacks. Four of these went to George Bridge, the standout performer in a game of incredible showings. Much like our friends from Te Atatu, the Tongan fans never gave up and neither did the valiant Tongan team who managed to pull back one try, earning a huge cheer from the whole stadium. Even with the game a foregone 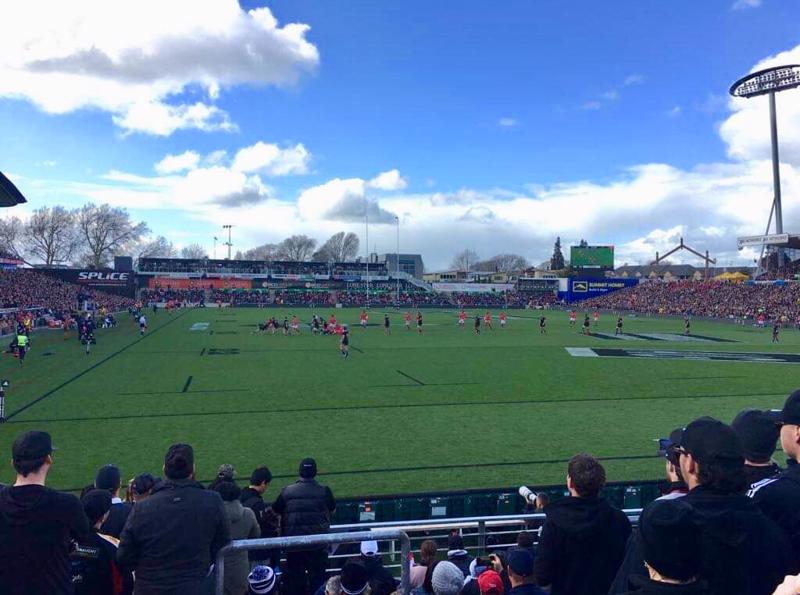 conclusion, neither the players or the fans gave up hope, aside from a humorous cry of "Please Jesus, let this end" just before the half time whistle.

After the game, we hot-footed it to Hamilton gardens. This was described as "the most beautiful park in New Zealand" and "a great place to propose" by one of my colleagues (nudge nudge). Whilst it was beautiful, many of the flowers were out of season. I did not propose.

Jane proposed that we go for a beer on the way home. I agreed so we headed to the Good George Brewery. This brewhouse is located in an old church (complete with stained-glass windows depicting beer in its various, god-like forms). I like to think if it as the “Temple of Brew”. We’ve tried many a Good George in our time here in NZ but 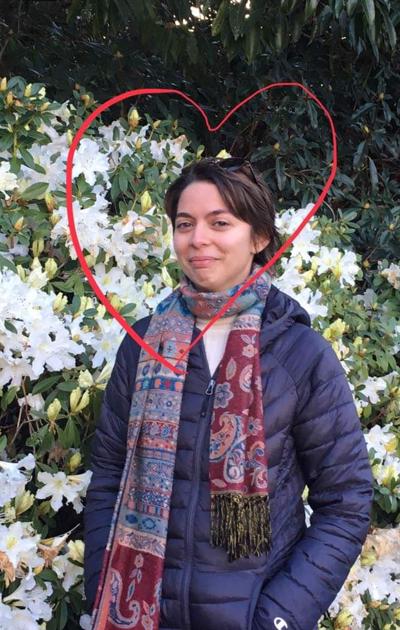 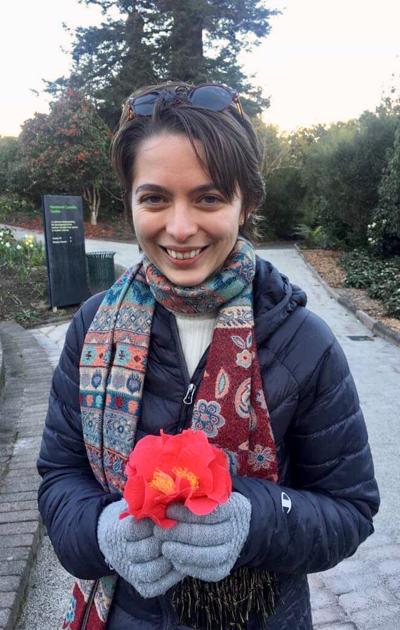 our new beer of choice (Fog City IPA) was so tasty that we just HAD to take some home in a "squealer". Squealer means bottle here for some weird reason.

After a short drive we arrived home to find the family watching the Australia v Samoa game, which the Wallabies won rather unconvincingly 34-15. No offence to Samoa but the Aussies are going to have to bring their A-game to even come close to challenging the All Blacks in the World Cup! (Yes, were Kiwi now which I’m told means we naturally hate Australia and vehemently support anyone who plays them, much like Wales really). At the end of the match we celebrated by playing a very heated game of Articulate (is there any other way to play?). We won again as we are experts now. My favourite moment was Kirsty’s description of “Naples” to Karen - "You get milk out of them! Men have them too but they don't work! Yep! That... but a city!" Genius.