This week, our big adventure properly kicked off. The van was readied and we’ve finally got ourselves on the road. We’ve given ourselves until April 21st to get to Wellington - 3 weeks to do a 7 hour drive. Should be doable...

Our first port of call was Port Waikato. This is basically a huge sand dune when the tide is low and given that this is a black sand beach, that’s a dramatic sight (and tough on the soles of the feet!). There was a Māori festival on the bank when we arrived. Everyone seemed very happy and entertained but we had no idea what was going on really!

That night we stayed in Onewhero, pronounced “Onafero”. This is one of the best free-camping spots, with plenty of room behind a rugby ground but there’s not much in the town itself which comprises a handful of houses and a small garage. We took a good look at our new angle on the stars and went to sleep.

The next day, we visited the Nikau Caves, just south of Port Waikato. When we arrived, the lady asked “are you cavers?” - to which I smoothly replied “Errrrr, not really, no.... Do we have to be? This is fine, right?” See. Smooth. We hadn’t quite realised what we were getting ourselves into until we were signing on the dotted line that we were fully aware of the expectation to “crawl on hands and knees through water”, we shouldn’t have any respitory or heart problem, or be afraid of tight spaces.

Phillip, our tour guide and proud owner of the cave, asked where we were from and Anne (the aforementioned lady) had inexplicably hitchhiked from Oxford to Ilminster when she was visiting the UK some years ago. It’s a small world, but it’d take a while to hitchhike around!

Unless this has gone viral (has it gone viral, Mum?), then everyone reading this will know that I’m a rather anxious type. They’ll also know that that is a laughable understatement...

Being 25 metres underground, in the pitch black, crawling through caves, knee-deep in eel-infested waters therefore, is not normally my cup of tea (recipe for the worst cup of tea ever?) but, it was really fun! We walked a stretch of the cave led only by light from the glow worms and Phillip told us about his experiences in the caves. He first went in the Nikau Caves cave aged 15 and has since been back around 4,000 times! Jane is either a natural at caving or is just much better at fitting through the available spaces than everyone else. Both perhaps?

After this, we went to wash in their private waterfall and Anne said we could camp there overnight and help ourselves to herbs from the garden if we wanted (just basil and stuff, Mum). We had plans the next day so we politely declined and went back to Onewhero for the night. 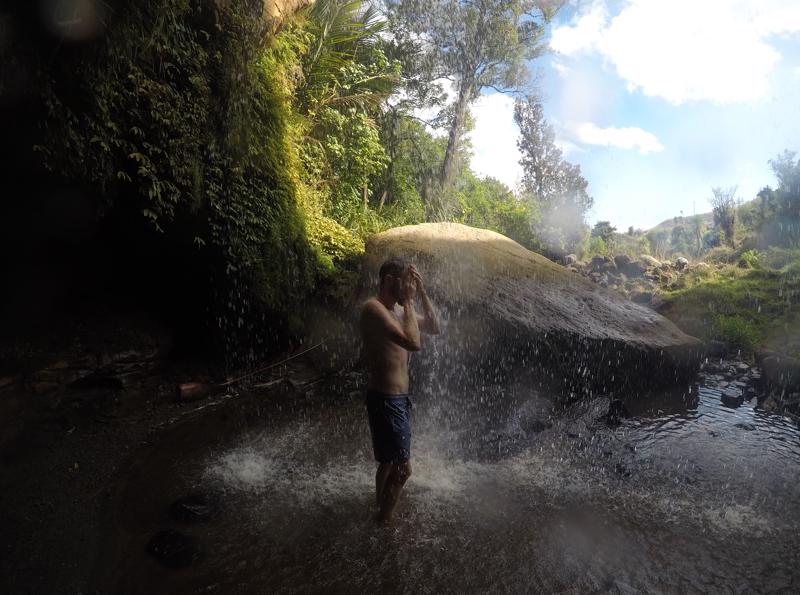