“You can’t beat Wellington on a sunny day”

In “Wetlington” it rains. It rains a lot. But Kiwis far and wide will quip that you just “can’t beat Wellington” on a sunny day. In our case, we didn’t have the pleasure of said day but we managed to plan out lots of “sheltered” activities for the duration of our stay, namely drinking an dinning at the city’s many lovely bars and eateries.

As it’s socially unacceptable to drink in the morning (unless you’re in a airport on the way to your holiday destination) we decided to go to the botanical gardens instead. Getting into the Uber, I wasn’t really sure that this was such a good idea, given that Jane can barely walk and it was completely chucking it down. She assured me this was the right decision and we’d have fun. Luckily there was quite a sizeable greenhouse in the garden with lots of lovely flowers and a pond full of guppies and just one giant koi carp. The staff even gave Jane a mobility scooter which, once the rain had stopped, she used to climb the biggest hill in the gardens whilst I trotted behind her trying to

Socially acceptable morning complete, we continued on to the Whistling Sister brew pub in town. Whilst we’ve tried A LOT of beers in NZ, this brewery is one with a difference. Whistling Sister Brew Co was established by the Scott family in memory their beloved sister, Karen Louisa, lost her battle with breast cancer in 2015. The brewery donates 20 cents from every bottle purchased to the Karen Louisa Foundation which funds research into breast cancer treatment. It’s good beer for a good cause. Good job guys!

Whilst enjoying our tasting board, we started to wonder what we should get up to in the evening. I suggested the local battle of the bands which was on at a venue called “Valhalla”. Jane, of course, suggested the national Roller Derby Final which she had seen advertised on our stroll about town yesterday. Because we are indecisive, we decided to to do both.

Roller Derby, by the way, is straight-up madness. This ridiculous sport is played on on a flat, oval track in a wooden sports hall, and involves

two teams who both try to “block” (smash with their body) the opposition “Jammer” (person trying to skate around everyone) from skating passing them. This is rugby on roller skates. Each “Jam” is up to two minutes long, and play is split into 30 minute halves. It’s at least a full contact sport, though according to the rules, “Skaters cannot use their heads, elbows, forearms, hands, knees, lower legs, or feet to make contact with opponents...[or] make contact to opponents’ heads, backs, knees, lower legs, or feet.” So basically you can rugby tackle someone to the ground with your body whilst you hurtle around the gym in your skates. Oh and if your play is considered “unsafe”, you sit out for 30 seconds and can then smash someone to death again once you’ve had your time out. Right then.

The most amazing thing about the sport was showcased by the fact that the first match was a kids match. Despite the inherent violence the kids game was fairly safe, though there was one player who absolutely took no prisoners and smashed the hell out of all the other kids. Unsurprisingly this was Jane’s favourite player.

The main event was the final of the adult league. The home team (and reigning champions) “Comic Slams” versus “Brutal Pageant” from Christchurch. The uniforms were great. Each player had their (mostly questionable) nickname on the back of their shirt and aside from wearing the same colour, everyone was donning some variation

on fishnets, tutus and luminescent leg warmers. Much like a roller disco. There was a lot of body slamming and some amazing feats of skating, especially by “Curious George”, a skater who probably weighed around 7 stone but had lightning feet and racked up the points for the home team. After an intense hour of Jamming, Comic Slams came away with the win for the second year in a row (Go Wellington!). Impressed with the barbaric, but really very inclusive sport, we joined the skaters in the ring for a final lap of honour.

Pumped by our sporting victory and the thought of seeing some more live music we journeyed on to Valhalla (not Viking heaven unfortunately). What ensued can only be (truthfully) described as one of the worst billings ever. A horrible band followed by two others which weren’t much better. After the third, Jane was done and I was hungry. We ended the night with some huge falafel wraps and some very unique memories. 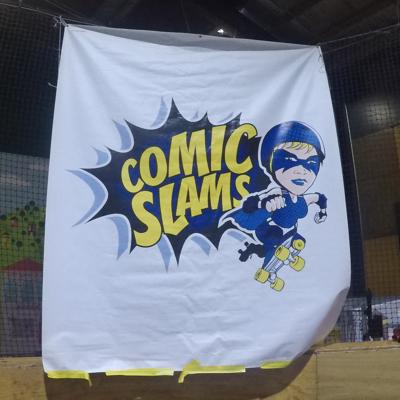