There were, of course, a few unforeseen surprises/issues. Firstly, a pleasant surprise - I managed to get a job working at the University of Auckland with relatively little effort. I put in a CV for an generic admin job and got offered something much more interesting and better paid! Turns out my particular experience was perfect for a brand-new role that had just come up. Whilst this unexpected win had many positives, taking the job also limited options for Lewis, as he would also need to get a job in the city, given his lack of transport options. Public transport is few and far between here especially in the rural communities.

Speaking of public transport, commuting time to the city was the second surprise. In theory, one could driving to work in a mere 45 minutes. In practice you’re looking at at least double the time in rush hour, and who knows where you’re supposed to park in Auckland

Central Business District (CBD) without paying a fortune? The only option was to drive to the nearest train station (Papakura) and take the train in to Britomart station in the CBD. Papakura station is the last stop on the Southern line going out of town, taking roughly an hour each way. Combine this with a 25 minute drive to the train station, plus a 15 minute walk at the other end, you’re looking at easily over 3 hours commuting time on a good day.

Luckily it didn’t take Lewis long to find a job at Auckland Council. Though his hours are longer and the work, as we feared, is boring. This also presented our third challenge- buying work clothes. For context, people here are generally quite a bit bigger and taller than the both of us. The contrast is most obvious for Lewis and we really struggled to find shirts and trousers in the right size at a reasonable cost. Where is Primark when you need it? After numerous shopping 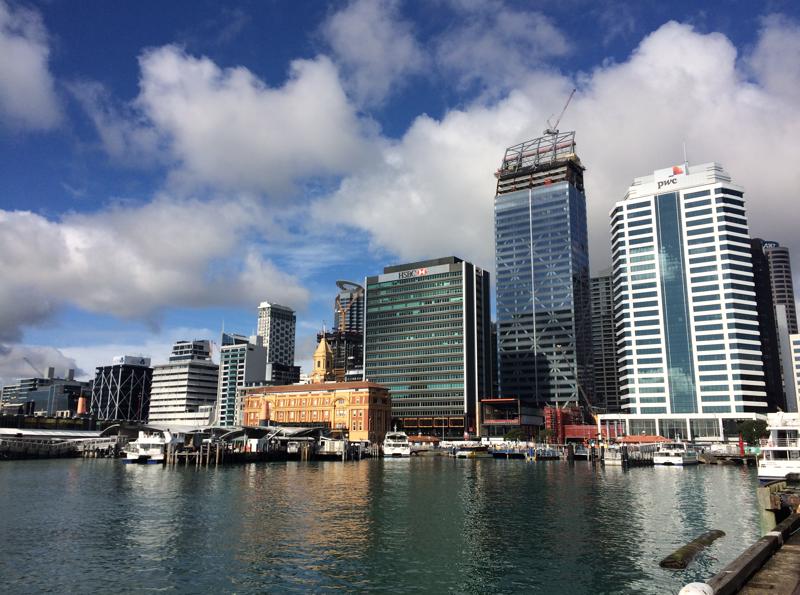 trips to tens of stores we managed to kit him out for a full week of work. We probably spent more in petrol than clothes in the end!

Despite the potential problems, it all worked out well. We both managed to successfully secure jobs and are putting away our hard earned cash for the next leg of the trip. Go team! Although it’s a little tough as our days are essentially 14 hours straight, getting up at 6 am and not home until 8 pm. (I knew there was a reason that I vehemently opposed moving further than Zone 3 when we lived in London.) We know that the long hours and hard work will pay off once we are back on our travels. Plus, as we’ll have been working for a whole three months, we’ve booked in a much deserved holiday to the island paradise of New Caledonia where we’ll be joined by Lewis’ mum. See you in October Sue!