Next up on our East Coast tour was Gisborne. Gizzy to her friends, this seaside town takes pride in being the first city to see the sun each day.

As a result of its easterly location, the marketing here is rather forced. "Most eastern Mexican restaurant in the world" was my personal favourite - what a claim to fame! Our plan for Gisborne was to drink some beer and do some surfing. If I'm honest, this is my plan for most places.

We stayed at the Top 10 campsite which is a franchise here. Top 10 is a somewhat soulless representation of the New Zealand camping scene but it's highly functional and close to all the important amenities (the brewery). We shared a tasting paddle at the aptly named Sunshine Brewery (step one, tick!). Typically we liked all of the strongest, most expensive beers the most but settled on buying a cheapy.

The following day we trekked the Coastal Walkway which taught us lots about the history of Gisborne/Taranganui-a-kiwa (that's Gizzy's Maori name). Captain Cook (the first European to land on NZ shores) of the HMS Endeavour first made anchor at Poverty Bay where he went ashore and promptly shot six Maori in a "misunderstanding" of cultures, (he also accidentally kidnapped and shot numerous other Maori at various landing points in his expedition). Cook named the area "Poverty Bay" as it afforded "absolutely nothing" that he intended to replenish the Endeavour's stocks with- how inconvenient!

Of course, the area has a far richer history than Cook's bloody intrusion. Taranganui-a-kiwa is one of the landing places of the original Polynesian migrants when they came to New Zealand in the fourteenth century. These ancestors of the local Maori traveled from Hawaiki, the spiritual homeland of the Maori people (which no-one quite knows the location of, possibly somewhere in French Polynesia), across the Pacific ocean on the famous sea-faring waka (canoes). This was an awe-inspiring journey across thousands of miles of ocean, where they navigated using star constellations and braved the elements. We couldn't help but wonder how many waka hadn't quite made it to Aoteoroa, and most importantly, how the sea-farers had managed to cook in entirely wooden vessels - surely they didn't go the whole journey without so much as a cup of tea?! We pondered the big questions from the top of Kaiti Hill which looks out over the beautiful bay. Here, we met an over-zealous local who told us that Princess Diana had planted a tree nearby. We're British so that's important...

Back at the campsite, a fellow camper sung the chorus to "Take My Breath Away" eighteen times. I thought about reminding her of the verse but was afraid of the outcome. Jane wasn't feeling too well by this point and we'd bought a lottery ticket so we decided to STAY IN 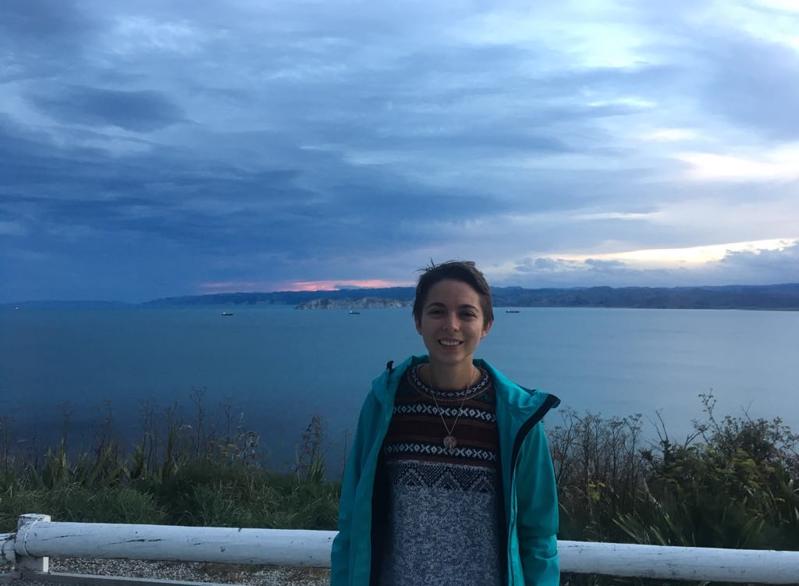 AN AIRBNB. Yes, we are big spenders.

Gill and Nick's place is just outside of Gisborne, in a place called Hexton. We primarily chose to stay there because they have a dog and the name of their village reminded us of Hoxton. This turned out to be a great decision as it's incredibly peaceful, the room was lovely and they have a dog. Did I mention the dog thing? DOG.

Our hosts were a very welcoming English couple, who have been in NZ for five years, and did their best to sell the concept to us - regaling us with tales of mountaineering, diving and reminding us of how rubbish the weather was back home. A relaxing stay was exactly what we needed. We headed out a couple of times, to see a very wide waterfall and to go to a scenic reserve. On our final day of the stay, we decided to go surfing. It was freezing, there were barely any waves and we still managed to get a number of bruises. We went for lunch afterwards then played football. Yes, this somehow counts as relaxing...