North Shore, Not Sure

Some things happen for a reason. I don’t know why it’s taking so long for my ankle to get better. Or even why I got injured in the first place (we can speculate on the dangers of running another time), but it has certainly made the last few months a lot more difficult than we could’ve ever anticipated. Despite the bad run (pun intended) we’ve tried our best to still enjoy our time and find creative ways around my ever present limitations. Certainly tackling that redwood tree walk on crutches was one of the highlights (literally) of the trip, and I don’t think I’m ever going to walk into the sea on my own again - I’m only being carried in like a Queen from now on (the Queen probably does need to be carried into the sea, come to think of it). We’ve been contemplating for many months whether to stay or go, whether it’s worth waiting it out to try and get to the South Island (which is our ultimate goal), or whether to call it quits and head home.

Last week was an especially tough week following our amazing road trip with Ellie. We had a brilliant time, but things were difficult at points, especially when my mobility was extra limited. Once we got back to the Ashworths’ house things really hit home. I wasn’t feeling much better than at my worst points during this injury and there really wasn’t any chance of us carrying on travelling like we wanted to. Lewis had already quit his job and my prospects weren’t looking particularly good. We were both feeling the pressure of not wanting to make the decision, yet knowing it was probably the right time to give up.

In the midst of our miserable musings, Lewis was contacted by a company who he had worked with back in London. They had a job coming up that he might be interested in and they encouraged him to put in an application. In the slowly rolling tempest of our everyday struggles, this seems like a lifeline being tossed down. When you have no job, no house and can’t make long-term plans because you don’t know day to day whether you’re going to be able to walk unaided, or if you’ll be confined to crutches, it’s hard to make sense of what you should do. This was a possibility for stability in an otherwise precarious situation. There was just one problem- we’re not quite done yet.

Contemplating what life would be like if we went back to London we realised that as much as things are bad now, giving up on our dream would be worse. Taking the job would be a commitment to being back in the UK for an extended period, and in all honesty would mean that we probably wouldn’t be able to come back, and certainly not in this way. If there is any chance that we be able to finish what we started, make it to the South Island, see some whales, climb some mountains, surf, ski, swim-do any of those things, the temporary chaos would be worth it.

We made the decision to stay in NZ and work for the remainder of our time here with the goal to save up some money for our summer back home and (hopefully) for when we return to Aotearoa in August. It was still a tough decision to make. What would I do for a start? After spending five weeks trying to “get better” before Christmas, I couldn’t do another stint of not working - I’d go mad. Plus there was no guarantee that Lewis would be able to get his old job back, and after months of ups-and-downs Ive had no indication that things will ever really get better in terms of my recovery.

Since we made that decision a few things happened: Lewis got his job back at NZTE (of course, they are lucky to have him!), I got a job cooking for a wealthy family over the North Shore (more on that another time), and most importantly we moved to Takapuna. ”Why is this important?” I hear you cry. Takapuna is just another suburb of Auckland, it’s not particularly special or even as quaint as some other regions nearby, i.e. Devonport which is literally a cute English seaside town on the Hauraki coast. In we moving to Takapuna we met our Airbnb host who noticed my limp straight away and it just so happens that their daughter is a very, very good physiotherapist. To cut a long story short, she basically beat me up and stabbed me with a load of needles and I could walk again! If only we’d known that total brutalisation would’ve helped I’d have done it a long time ago.

After over four months of immobility this is nothing short of miraculous. I’m now going from strength to strength and doing things that I felt I’d never be able to do again. Even just the simple things like walking uphill and going up and down the stairs were a struggle and now are possible! (though sometimes a little painful). Though we’re still not sure if we’re doing the right thing, we are very glad that we are giving it our best shot, and (for now) it does seem like fortune favours the brave. I guess that we were due a change of luck and it’s given us renewed hope and vigour in our quest to make it to the South Island, if a little later than planned! 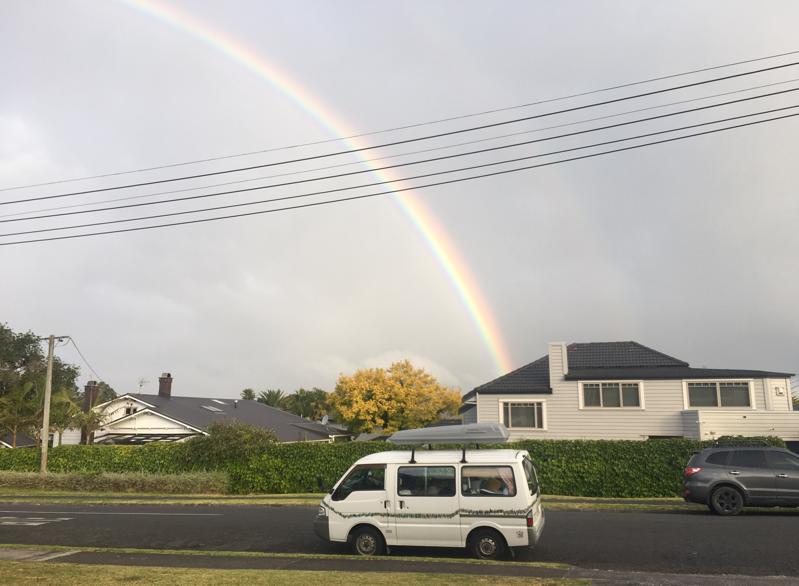