Tane of the Sky Father

As a group of manuhiri (newcomers) waiting to be welcomed by tangata whenua/hosts, we congregated early at the gates of Waipapa marae. The constantly changeable Auckland weather thankfully held out and the pōwhiri was initiated by a female host, performing the role of Kaikaranga - calling out from the meeting house to our group. Our own Kaikaranga responded to the call as we slowly approached wharenui (meeting house) though the marae forecourt. As Michael had explained in the workshop, kaikaranga are always female as women sustain the genealogy of the group and can therefore interact with the ancestors who reside in the spiritual realm. Whakapapa, or genaology, is the foundation of Māori society, and sustaining the mana (power) and success of the collective is the duty of each individual. Māori traditionally recognise the ancestors as the propagators of tribe’s current success, and thanks and reverence must be shown accordingly. It is believed that the ancestors can trace their lineage all the way back to the Atua (Gods), and that we carry our ancestors with us where’re we go. I personally consider this both awesome and a little creepy to think about!

The call and response weaves a metaphorical rope between the two groups, guiding the visitors waka (canoe) safely to the wharenui. It also ensures that the ancestors of each party meet on friendly terms and are welcomed appropriately (if the ancestors don’t get on it can mean bad news for success of the new relationship). Women enter the house first and sit at the back of the visitors side, men at the fore. This, I’m told, is to ensure that if something goes wrong (maybe 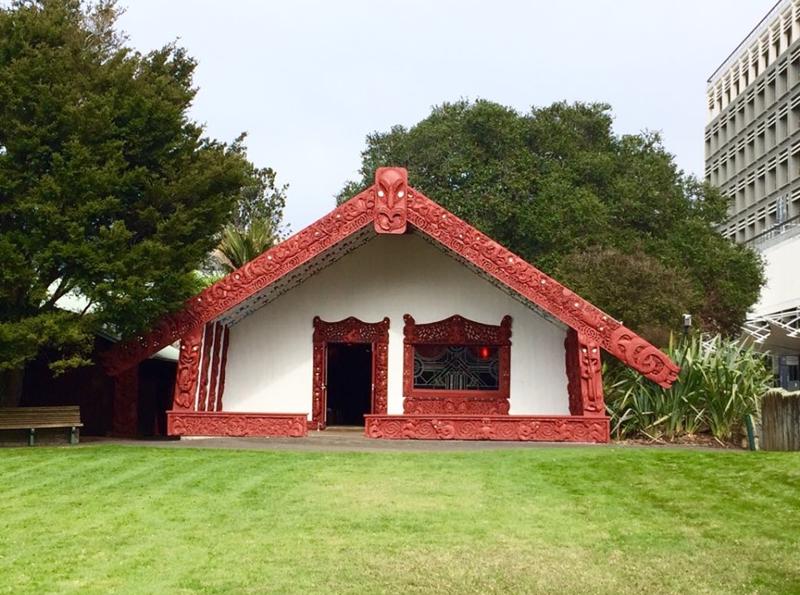 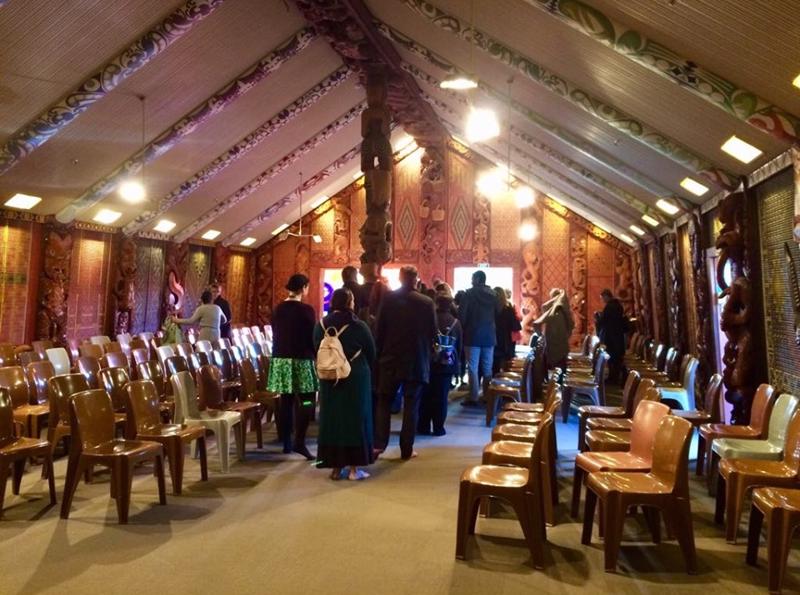 somebody offends the host or the ancestors don’t like each other?) the women are protected as, and I quote the ceremony leader Michael, “men are expendable“.

Once inside, Michael greeted us in te reo, following with a brief translation into English and a speech from the Vice Chancellor. A kaikorēro (speaker) from our group then returned the formalities. Michael had gleefully warned us at the pōwhiri workshop that a male from the group would need to speak on behalf of the newcomers, (this was suitably met with a looks of dread from the desperately few men in a group of mostly foreign new staff). Luckily a brave kiwi stepped up to the to the task and was impressively able to remember enough te reo Māori from his school days to comfortably introduce himself, and the group, before throwing in a few jokes in English too. The tangata whenua sang a waiata (song) for us and we offered our koha (gift) and returned the favour by singing “Ehara e te mea” which is a traditional Māori song to the tune of a hymn.

The ceremonies in the wharenui ended with the Hongi and Harirū. The hongi is the traditional Māori greeting in which two people press together their foreheads and noses together. The two then then “share breath” which allows their wairua (spirit) to mix. In our ceremony, there were possibly 40 newcomers, plus the hosts, and it is custom at the University to greet each person individually as part of the welcome process. Pressing your nose and forehead into the faces of 50 strangers to “share breath” is possibly one of the strangest things for a British person to experience, and needless to say, the novice group of international staff had its fair share of overzealous clashes of heads. Things are made a little bit more familiar (and slightly less dangerous) by the harirū, which is the shaking of hands. A person will offer their hand before touching foreheads, which goes some way to controlling the speed of the hongi. Entertainingly, this part of the greeting was introduced into the process following the the mixing of Europeans into Māori society, and the word “harirū” itself a play on the phrase “how do you do?”.

Tane-nui-ā-Rangi itself (the wharenui or meeting house) full of amazing treasures! Every inch of the house, inside and out, is covered in intricate carvings and tukutuku (weaved panels) of spectacular colours and carefully woven detail. Each aspect of the whare, from the beatifically crafted decoration to the structure itself, has been carefully chosen for its relevance to the history of the local people, the University, and the land on which it stands. From the outside we see the face of Tane on the koruru, the apex of two barge poles, with the two maihi (barge poles) representing Tane’s arms. It’s generally thought that the meeting house represents the body of main ancestor (in this case Tane) of the tribe with two arms outstretched to gather the the group under the ancestor’s protection. Inside the wharenui is a tapu (sacred) space, and tikanga/custom must be followed.

Directly over the door is a depiction of Tane in his quest to bring back knowledge from the heavens, and some impressive (and scary) looking ancestors make up the poutokomanawa poles which support the structure. There are depictions of the gods along the ceiling, and tukuku panels and carvings of the commanders of the great 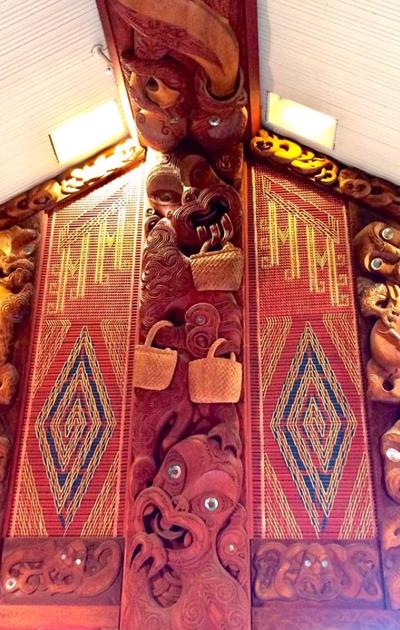 migrating waka. Being unaccustomed to seeing Māori carvings these appear both extremely beautiful and abstract, with human-esque figures almost hideously disfigured and contorted.

In an effort to train my inexperienced eye to vaguely interpret and understand what was actually going on in these mysterious carvings, I went to the University Library to read up on the history of the house and Māori carving. One unexpected and hilarious tale which I garnered from my research was the story of Maui and Hine-nui-Te-po (Goddess of Death). Maui is a kind of Polynesian Hercules and famously fished up the North Island of Aotearoa, amongst other feats such as slowing down the sun and angering the Goddess of Fire to the point that she set the world ablaze. In his final quest he ventured to the underworld to slay Hine-nui-Te-po and bring back immortality for mankind. Seems like your standard heroic myth so far. Well, let me tell you things are about to get really weird. In a twist that few could have predicted, Maui decides to kill Hine-nui-Te-po by entering her body through her vagina (whilst she was asleep) and cutting out her heart.

Cut to the chase, things don’t end well for Maui. Hine-nui-Te-po awakens to the sound of a laughing fantail (Maui’s companion) just as his head has “disappeared” and she strangles him to death with 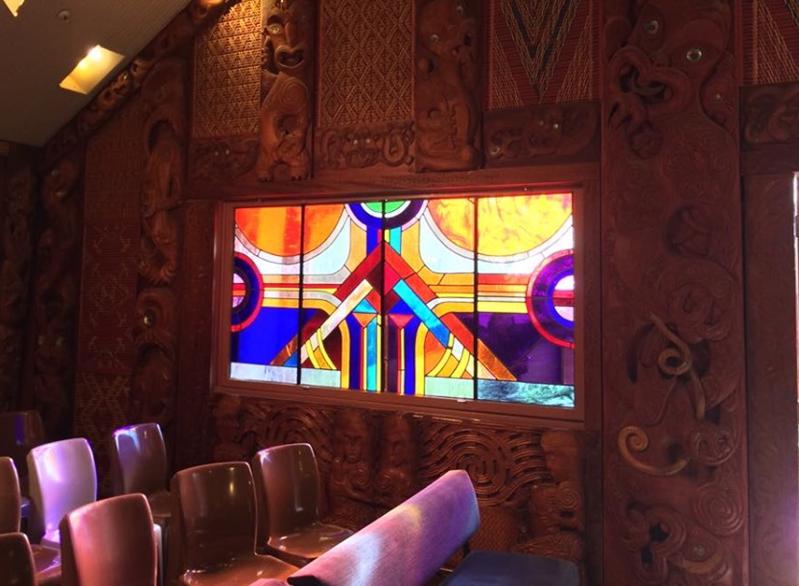 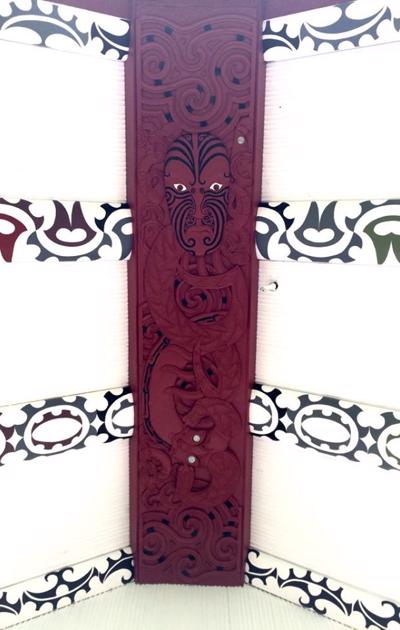 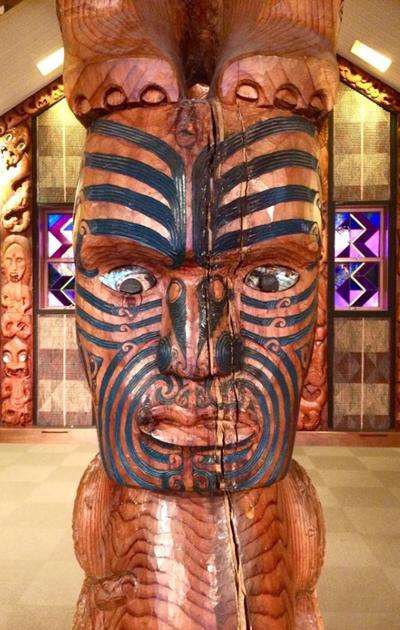 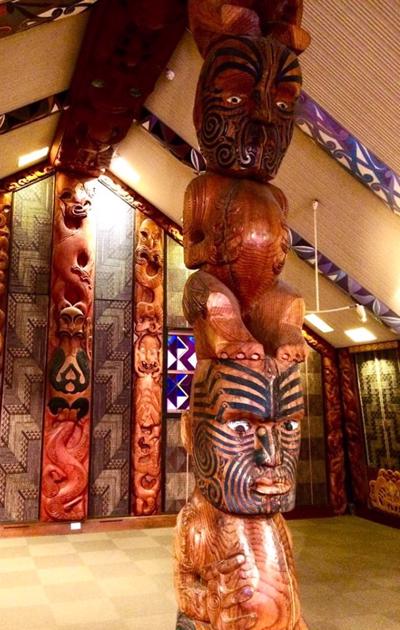 her thighs, thus man is robbed of immortality. The fact that this story is displayed in one of the official buildings at an internationally renowned University is genuinely one of the best things I’ve ever had the pleasure to know. Apologies to my old friend Taranaki, I’m sorry, this is now my favourite legend.

Despite the occasional bizarre tale depicted in the woodwork, there is something incredibly special about hearing te reo spoken in this beautiful structure, surrounded by the the histories and ancestors of the past. The beauty of Tane-nui-ā-Rangi is truly awe inspiring, and being part of this very special welcome is something I will carry with me forever.