I One of the big attractions of migrating to a small group of islands in the Pacific was to experience a different culture and to see a different way of living. On the road, we made a real effort to expose ourselves to as much of the native culture as possible. We visited local museums and points of historical/spiritual relevance and tried to learn Māori words and place names, as well as the legends of this great land (lonely Taranaki is still my favourite so far). I have to admit that things have been slipping recently. Of course, New Zealand’s colonial past has seen the export of lots of elements of British culture to Aotearoa, and there are lots of similarities between living out here and in the UK. Certainly it seems ironic that, having ventured to the other side of the world, one finds oneself working within one of the great institutions of western society (a University) in the biggest metropolis available. Yes, we’re hardly embracing island life right now!

All is not as it seems. Despite its pedigree, the University of Auckland has gone some way to recognising its place, both geographically and culturally, in modern NZ society. We have a school of Māori and Pacifica studies, respected Māori colleagues on the University Senior Leadership Team, and plenty of books in the library to learn about New Zealand’s chequered history, from the landing of the the ancestral sea-faring waka (canoes) from Hawaiki, to the brutal realism of the European invasion. Whilst working in an inherently British institution, I hardly imagined that I’d have the pleasure of taking part in this cultural exchange! My extremely primitive te reo Māori vocabulary is coming along leaps and bounds with help from my colleagues (thanks for the pronunciation lessons Gabbie, and sorry for the onslaught of questions!) and some cleverly integrated signage and translations around the campus. More to my surprise, I found myself invited to a Pōwhiri (pronounced “poor-fir-i”) - a traditional welcome ceremony at Waipapa Marae, the University’s very own marae complex.

In Māori culture the marae (collectively the area encompassing the courtyard and important buildings of the local Hapū) is the centre of the community. This is where marriage ceremonies and funerals are held, politics are debated, guests are welcomed and enemies are fought. The word “marae” itself means to be generous or hospitable, and in the modern age there are more welcomes to be made than 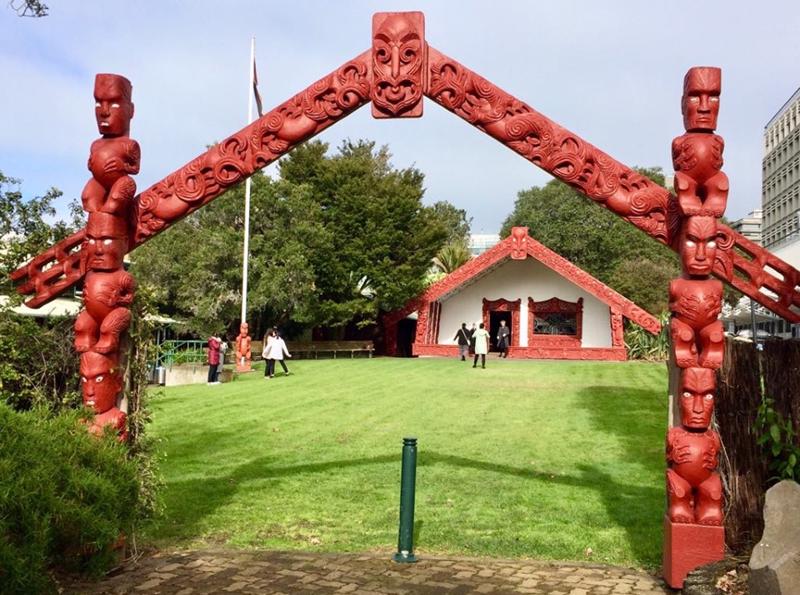 enemies to fight. Ceremonies take place in the wharenui (the meeting house). These whare, often beautifully carved and elaborately ornamented, provide both an appropriate physical setting in which to conduct ceremonies and discussions and a visible spiritual link to the Atua (Gods) and the ancestors of the tribe. Another equally important (for obvious reasons) building on the marae is the wharekai, AKA the food hall.

Waipapa Marae was opened in 1988 upon completion of it’s beautifully crafted meeting house and crowning jewel, Tane-nui-ā-Rangi. The whare’s namesake, Tane, is traditionally depicted as the God of the Forest and is one of 70 (!) children of Rangi (The Sky father) and Papa (The Earth mother). The name itself references the story of Tane travelling to the highest realm, where Rangi resides, to bring back the three baskets of knowledge for mankind, and was chosen as a fitting tribute to the University’s position as the seat of higher education.

I should mention here that according to tikanga (custom) visitors must be invited onto the marae by the tangata whenua (hosts) so, despite seeing numerous marae on our travels around the North Island, we had yet to venture into the heart of Māoridom. Considering this, I am extremely privileged and thankful as a member of the UoA community to have the opportunity to be part of the pōwhiri

ceremony. The prospect of being officially welcomed was both exciting and completely alien. Having no prior knowledge of marae tikanga, I was uncertain about what was actually going to happen during the ceremony, and had only glimpsed the wharenui from a distance. The intricate weaving of beautiful carvings and distorted figures (to the untrained eye) on the buildings exterior are mesmerising, and I was keen to know what fantastic toanga (treasures) lay inside.

Fortunately, our group of new staff were invited to a pōwhiri protocol workshop before the main event (phew!) where the ceremony leader, Michael, explained the pōwhiri kawa (process) as follows-

Karanga - the ceremonial call which welcomes newcomers to the marae.
Whaikōrero- speeches made by the hosts and visitors.
Koha-A gift to the hosts, usually money, but in former times would have been food to help restock supplies ready for the next group being welcomed.
Waiata-A song used to break up the speeches and to enhance the mana of the ceremony and speakers.
Hongi and Harirū-traditional greeting when noses out of together and life breath is shared, and hands shaken.
Karakia- a prayer giving thanks for the food.
Kai-food!

These seven steps bind the newcomers, and their ancestors, together with the tangata whenua, meaning that the visitors become part of the story of the marae and the land on which it stands, (including the final and most important step of eating together in the wharekai after the ceremony). In theory, this means that my ancestors and I will now be linked physically and spiritually to the University forever- very cool! In reality, this means I can help welcome new visitors and tidy up the meeting house afterwards (less cool but still important!)