Tuesday, April 16th 2019, 4am. We have lost our minds and are awake already. Why? It's time to traverse the Pouakai Circuit - surely no mean feat as there’s even a beer named after it!

In the dark, we drove to the visitor centre to prepare some soup for our journey. We had picked up a thermos the day before and I'm convinced it might turn out to be our most valued asset. Other brands are available.

We started the trek at first light, wearing five layers each. By about

7.30am, these would pretty much all be in our rucksacks. When the sun comes up here, it feels like opening the oven. The first few miles of our mission were a steep climb through the bush, eventually opening out to awe-inspiring views of Taranaki. We had many discussions about how we could definitely climb it in the beautiful weather (what snow?) and that the DOC were drama queens. In hindsight, they were probably right.

A large section of the Holly Hut route which makes up the first part of the trek is closed off due to a rockfall, so we took a 2 hour diversion to get back on the right path. We strode through numerous echoing valleys and dizzying peaks before making it to the first hut. There's a waterfall nearby and we were doing well for time so we took an hour detour to go and take a look. The falls themselves are beautiful but the walk down would be treacherous with a pack on your back. We saw a couple that had made this mistake and they looked haunted by the experience.

After our lunch of (actual hot soup!) we set off again, looking to complete our 9 hour walk to the Pouakai Hut. We didn't realise this at the time but, despite being the smallest hut on the route, the Pouakai hut is considerably more popular than the others due to its proximity to the tarns. The tarns are basically reflective lakes that capture Mount Taranaki is all his glory. The hut was therefore populated by intrepid hikers (like us) and selfie-hunting teenagers who had ambled up the much shorter side of the climb (a mere three hours) going for an insta-worthy image. Pics to follow #irony.

We managed to bag some beds before the hut completely filled up, unlike the Swedish family who arrived late and were resigned to the floor. They later took their revenge on the cabin by cooking some putrid pickled herring. 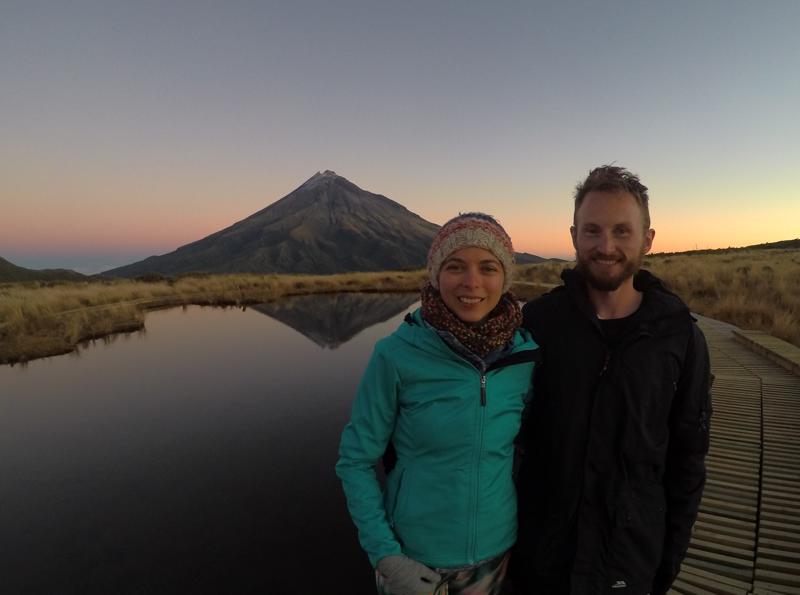 Trying to sleep in the hut reminded me of being in the Jolly Fisherman (my grandparents' pub) as a child - full of racket and mirth and people talking in accents I couldn't understand. It was great. I fell immediately into a deep sleep. The whole first day had been fantastic, full of stunning views and definitely worth the aches and pains!

At 5:30 am we were the first to wake and I, of course, smashed my leg on a table. The other hikers awoke to an alarm of invective. Sorry everyone! For a gentler wake up call the DOC should seriously consider putting lights into the hut. We started the journey home in the half light, greeted by a slumbering Taranaki, and saw the stunning sun rise over New Plymouth.

Within an hour, we hit Henry's Peak - a perfect spot for breakfast, with

views of Pouakai, Maude's Peak and Taranaki. The remainder of the journey was a real mental challenge - trekking through seemingly endless forest with no views or markers whatsoever but we marched for tea. The absence of a morning cuppa really motivates the legs and we enjoyed our first cup of the day in the visitor centre while we reflected on the last 36 hours. It was a fantastic and totally exhausting hike!

Of course we had neglected to do any washing, food shopping or emptying of the waste water in the van before our venture, so our next undertaking would be to do chores whilst completely spent. A fitting reward. 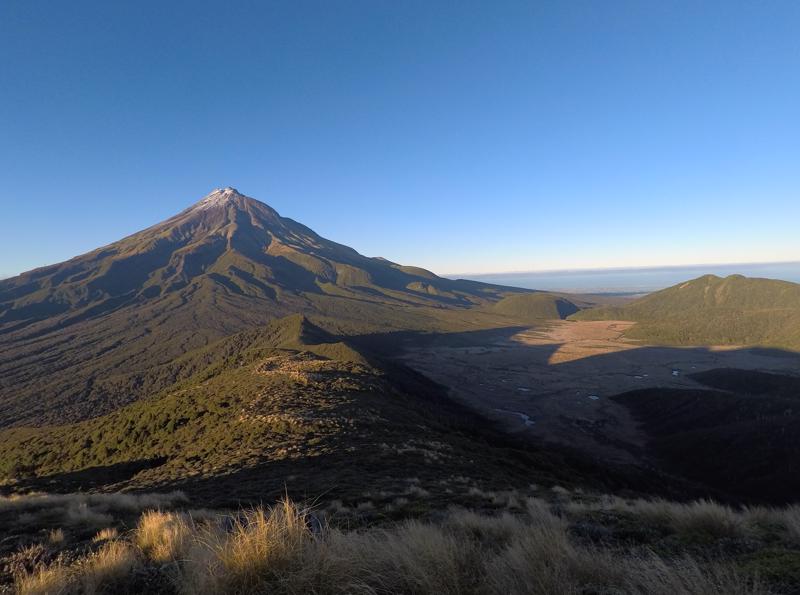