Touch down in La Tontouta and it all went swimmingly! Well firstly we had some stress getting to the airport on time (who knew you had to be a check in AT LEAST two hours before your international flight), and then there were some issues checking in our luggage, but aside from that it was pleasant enough and we enjoyed the “Air All Blacks” cabin safety video- they’re really into this rugby lark! Any minor stresses melted away when we caught the first glimpses of the world’s biggest lagoon as we came into land. It was honestly one of the most beautiful things I’ve ever seen, the colours were so blue you could hardly believe they were of this earth. Clo really knew what she was talking about!

We arrived with our luggage already unloaded and Manu and his mini bus were there waiting to whisk us away to Nouméa-pas des problemes!

Once we got to the flat we had a few hours before Sue arrived from Sydney so had been set the very simple task of stocking up with “some food and wine” for the evening. With the supermarche just a stones throw from the apartment this 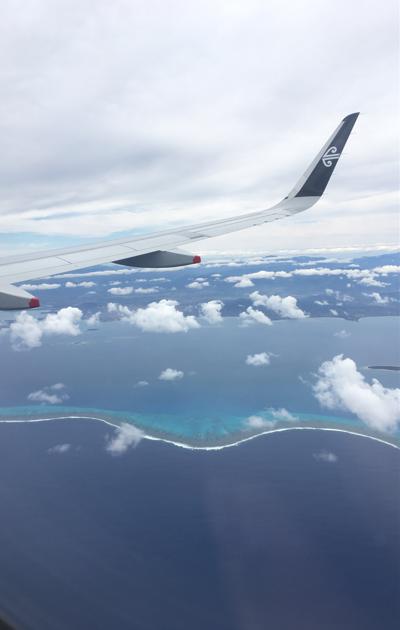 was going to be easy. We changed into summer attire and headed out to the shops to marvel at the variety of cheese on offer- yes, they certainly know their Brie from their Camembert here.

After trudging around the shops for a while I started to feel some pain in my right ankle. You may recall from earlier entries that I had injured this whilst running about a week ago, but as far as I knew this was on the mend and I hadn’t had any problems walking, but still couldn’t run. Safe to say that jandals (flip flops) and uneven ground were not my friend, and after our shopping trip I wasn’t in a good way.

Sue arrived shortly after to distract me from my imposing ankle pain, and after 8 long months on the other side of the world, we all swiftly resumed the usual patterns of wittering the night away over homemade pizza and lots and lots of wine!

The next morning we decided to explore the city beaches, Anse Vata and Baie des Citrons, each about a 25/30 minute walk from our digs. At this point my ankle wasn’t too sore and I resolved that wearing better shoes and walking slowly would help. It did (for the first half of the day) and we had an extremely pleasant time sun bathing on perhaps the windiest beach in the world (Anse Vata) where we paddled in the clear waters and watched the wind surfers zip along the bay at terrific speed. We scoped out a trip to Isle de Cannards (Duck Island) visible just across the bay for another day, and a fancy restaurant called “Le Roof” for dinner, then headed along to the Baie des Citrons.

Unfortunately, by this time I was extremely slow and achy and really struggling to walk. We stopped at local bar on the strip and had a beer while I rested for a while. The bay was certainly beautiful and the view and the beer made it easy to pretend everything was ok. When it came to leaving however, I really couldn’t shuffle far. We attempted to flag down a taxi, but couldn’t understand why no one would stop - later we found out that, unlike the rest of the world, in Nouméa it’s pretty much advanced bookings only.

Having failed with the taxi, we attempted to use public transport and boarded a bus. The bus dropped us off a little further along the bay, but we were still a good 15 minutes from the apartment and now faced with a new challenge- a HUGE hill. Running out of ideas, and patience with an every increasingly painful foot, we attempted again to flag down a taxi (to no avail). There was only one thing for it- I would have to sit on the streets of Nouméa until my ankle either got better or I was eaten by feral dogs. Lewis didn’t like this idea so instead he gave my a piggy back up said mountain whilst poor Sue heaved all of our bags up the same incline.

I have to admit, this was a low point in the holiday. We were all totally exhausted and I was pretty distraught coming to terms with the realisation that my ankle was unlikely to get any better for the duration fo the trip, thereby significantly limiting our activities. Once we neared the flat I shuffled off whilst Lewis and Sue stopped to considered hiring a car at the local EuroCar centre. I sat in the flat icing my ankle and feeling sorry for myself whilst I contemplated what I could possibly do in Nouméa without walking. After a while, Lewis and Sue arrived and announced that they had hired a car, which I presumed was positive news, though they didn’t look too happy about it (let’s just say they had a smashing time getting it into the car park).

After some more moping, we decided that the holiday would not be spoiled by such misfortune, and that this run of bad luck was bound to change, starting with a really fancy dinner to take our minds of the catastrophic start to our vacannes. With renewed hope for the holiday, we headed out (in the car) to Le Roof for some well deserved wining and dining.

Le Roof, the fanciest restaurant in Nouméa, is situated at the east end of Anse Vata bay, and sits elegantly atop a jetty over the water. The clientele is fancy, the decor fancy, and the food... is fancy-looking, but sadly, extremely disappointing. What can only be described as 70’s dinner party food (yes, there was a prawn cocktail), was the cherry on top of what was a total custard pie of a day. Highlights included a raw veg risotto for me, puréed mash potatoes for Sue and battered prawns a la Chinese chippy for Lewis. The best part of the meal was when a friendly dogfish appeared in the open section of the restaurant and a fellow diner started feeding it some of her bread roll.

Relieved that the day surely must come to an end soon, we paid the (eye watering) bill and retired for the evening. All we could do was remark at what a “car crash” the whole day had been, and drink lots of wine until we laughed and forgot all about it.