Wilderness Safaris is known as one of the best ecotourism operators in Africa. They are committed to nature conservation on all fronts and own around 50 amazing eco lodges, across the entire continent. I listed my 10 favorites.

At the end of February 2018, the Mombo and Little Mombo camps reopened after a restoration with a strong focus on sustainability. The luxury eco camps are located in the middle of the Okavango Delta, one of the best places in Africa to spot big game. Wilderness Safari has successfully reintroduced black and white rhinos here. Dine under the stars or watch a group of lions hunt their prey from the camp terrace. 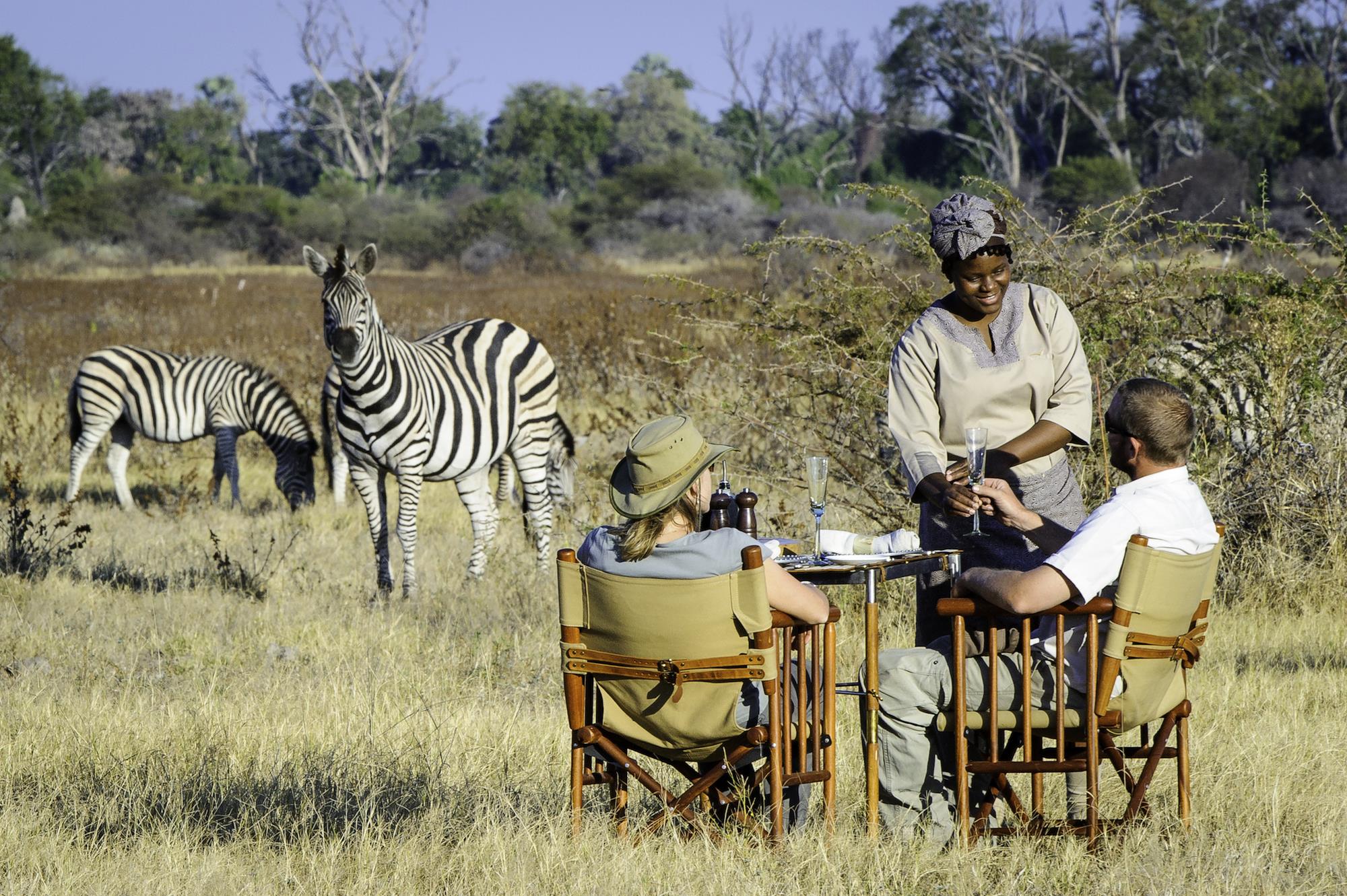 Sleep under a clear starry sky in the Star Bed of Abu Camp and fall asleep to the trumpeting of the herd of elephants. Or stay in one of the en-suite tents with indoor and outdoor showers. In this camp, located in unspoiled jungle, everything revolves around the protection of elephants. Learn everything about preserving this species of animals while following the local herd on foot through the wilderness, with a park ranger. Slowly, you'll form a bond with the animals and become part of the herd. 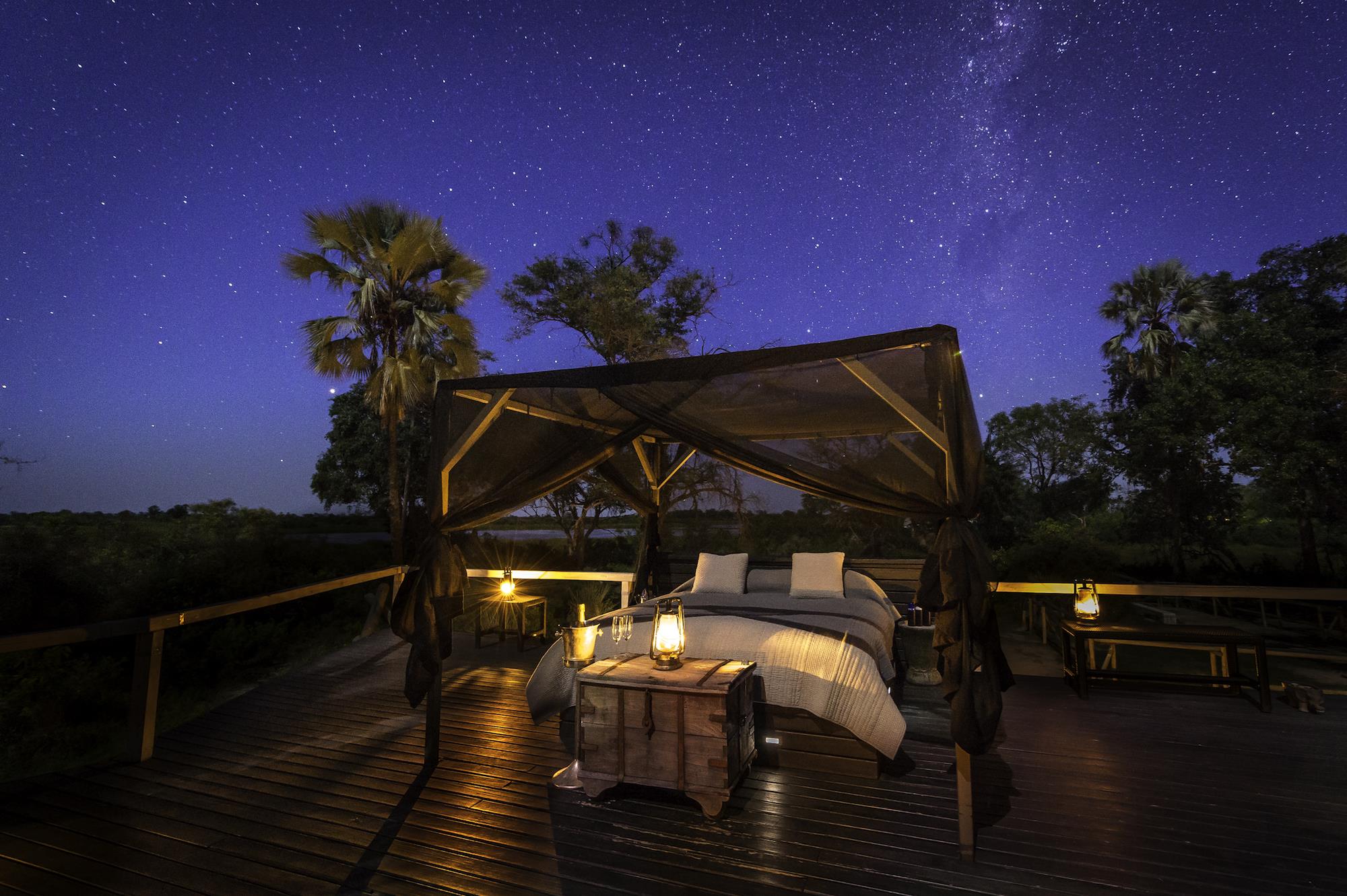 Spend the night under the stars on the Elephant Boma sleep out deck. Photo: Dana Allen / Wilderness Safaris

Located on the inner islands of the Seychelles, known as the most beautiful on earth, lies the unspoiled tropical retreat North Island. The eleven luxury, hand-made villas of Wilderness Safaris border directly on a pure white sandy beach that ends in a turquoise blue sea. With the so-called Noah's Ark project, the organization successfully reintroduces endangered Seychelles flora and fauna onto the idyllic island. 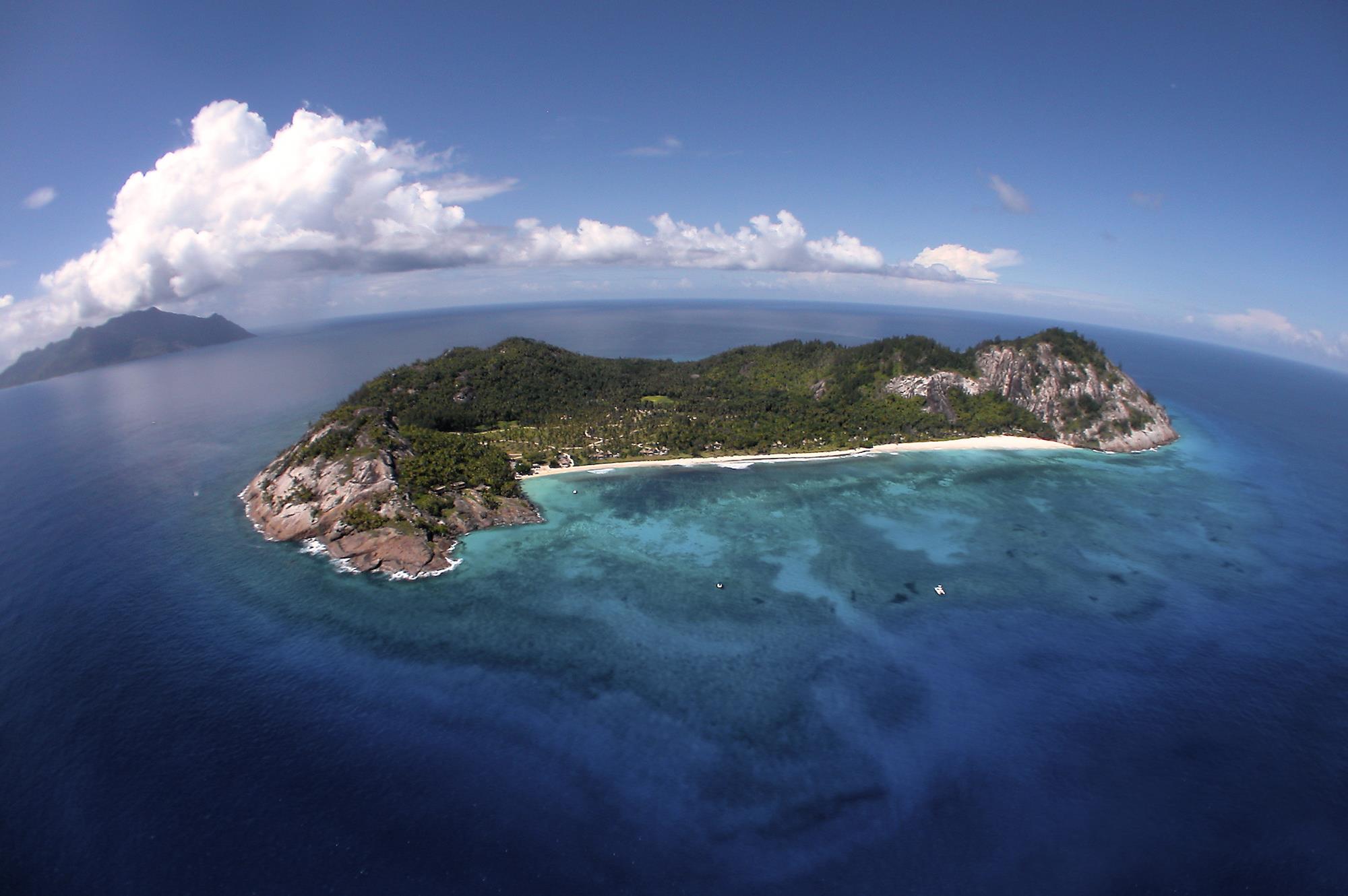 Located in the natural amphitheater of an eroded volcanic cone, this luxury ecolodge faces the peaks of surrounding Bisoke, Karisimbi and Mikeno volcanoes rising from the forests of Volcanoes National Park. The camp is a short distance from Park Headquarters, from where daily gorilla treks depart. Wilderness Safaris is working hard to expand the national park in which the critically endangered apes live with the aim of increasing their population. 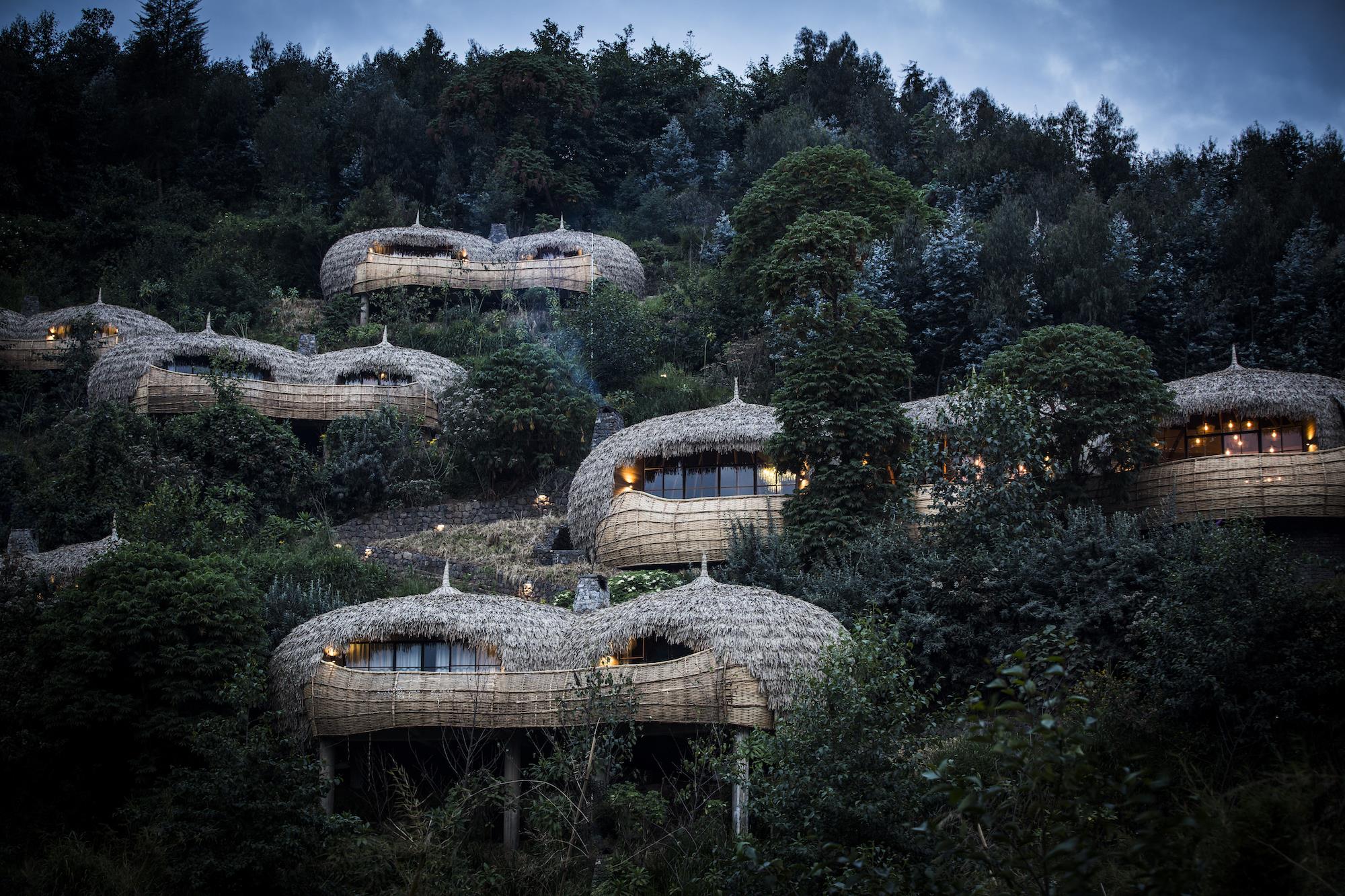 A new stylish ecolodge opened its doors in Botswana in December 2017: Qorokwe Camp. The lodge, located in the southeast of the Okavango Delta, has been designed in a sustainable manner with minimal impact on the environment. The entire camp is connected to walkways, with a central platform that offers a view of the lagoon where wild animals regularly come to drink. Because the water in this part of the Okavango Delta stays open all year round, it's always full of life. 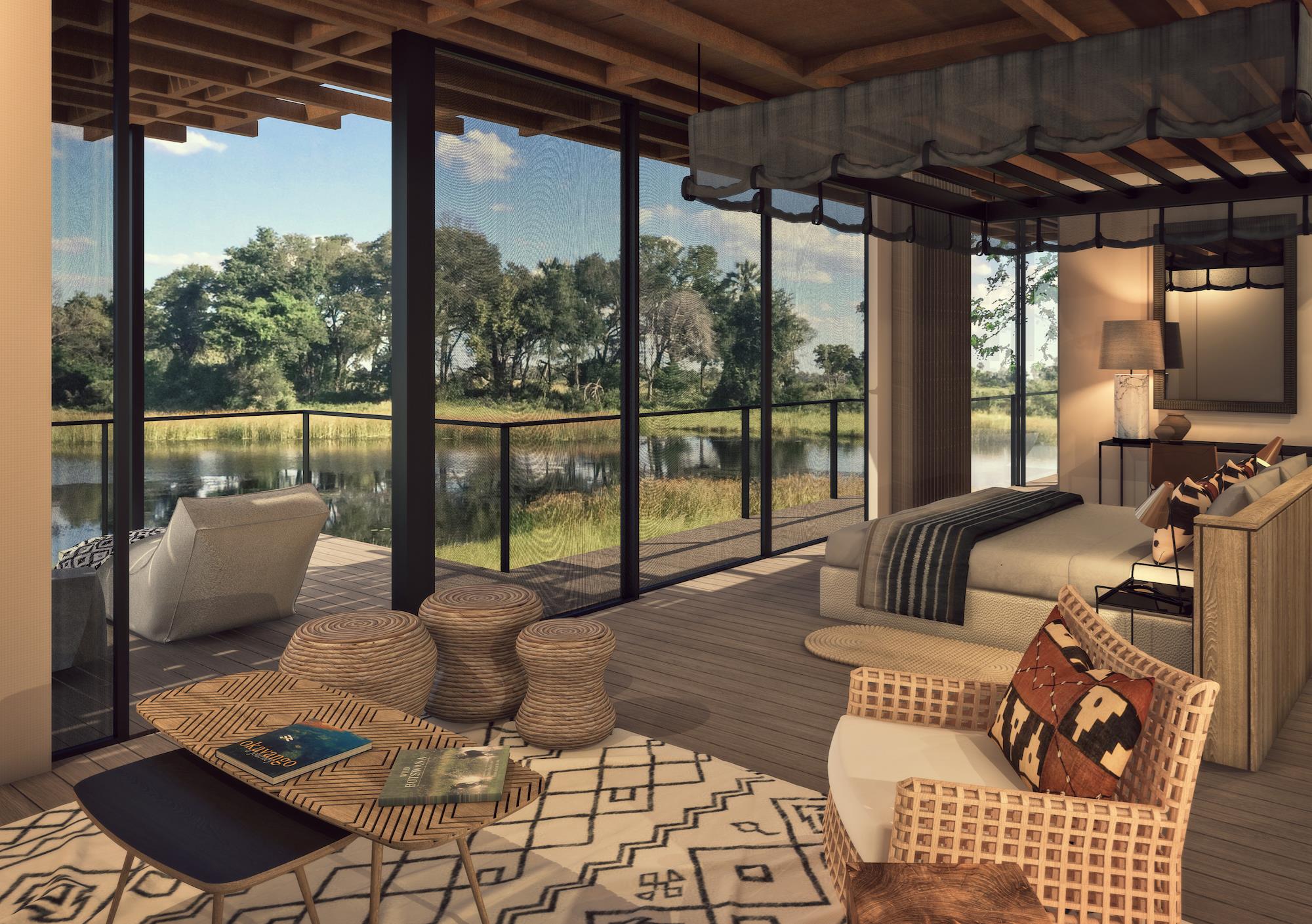 An impression of one of the luxury tents of eco camp Qorokwe. Photo: Wilderness Safaris

In the heart of Kenya, you can spend the night in a bird's nest villa surrounded by the vast wilderness of the Laikipia plateau: a popular safari destination, known for its dense animal populations. From the deck of the villa, the newest addition to Segera Retreat, you have a 360-degree view of endless plains and nearby rivers. Electricity comes from solar panels, food is prepared with products from local farmers and the tree branches of the nest are woven by the local community. 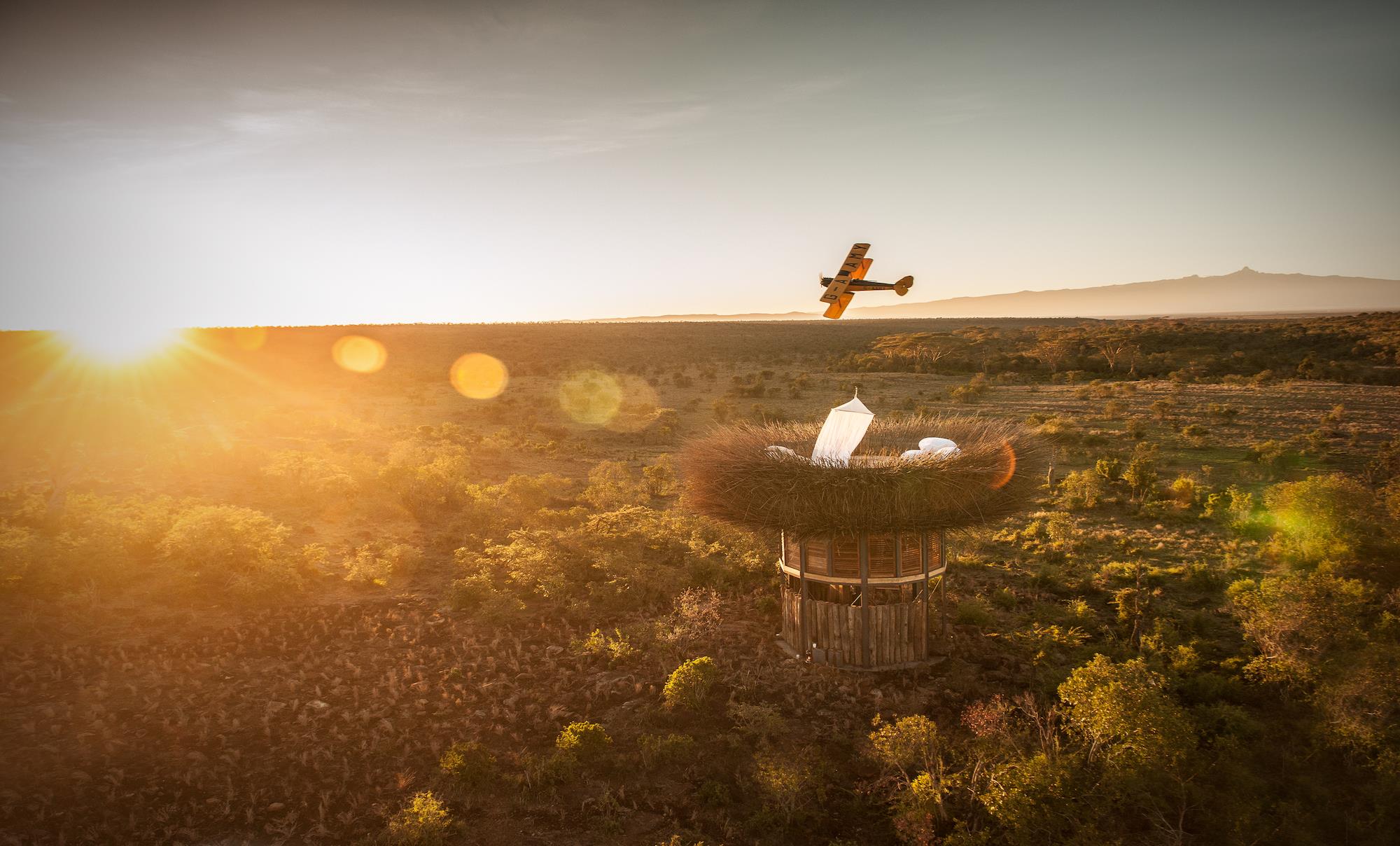 The bird nest-lodge of the Segera Retreat in Kenya, photographed from the air. Photo: Wilderness Safaris

The DumaTau luxury tented camp in the Linyanti private reserve has been voted one of the best eco-lodges in the world. Bordering on the western side of Chobe National Park, this is an important crossing point for elephants and the hunting area of lions and wild dogs. View the action from the luxurious rooms with panoramic views of the river. DumaTau runs on solar energy and works closely with the government to guarantee the conservation of wildlife in the area. An important subject in Botswana, for example, is the large elephant population and its effect on vegetation and other animal species. 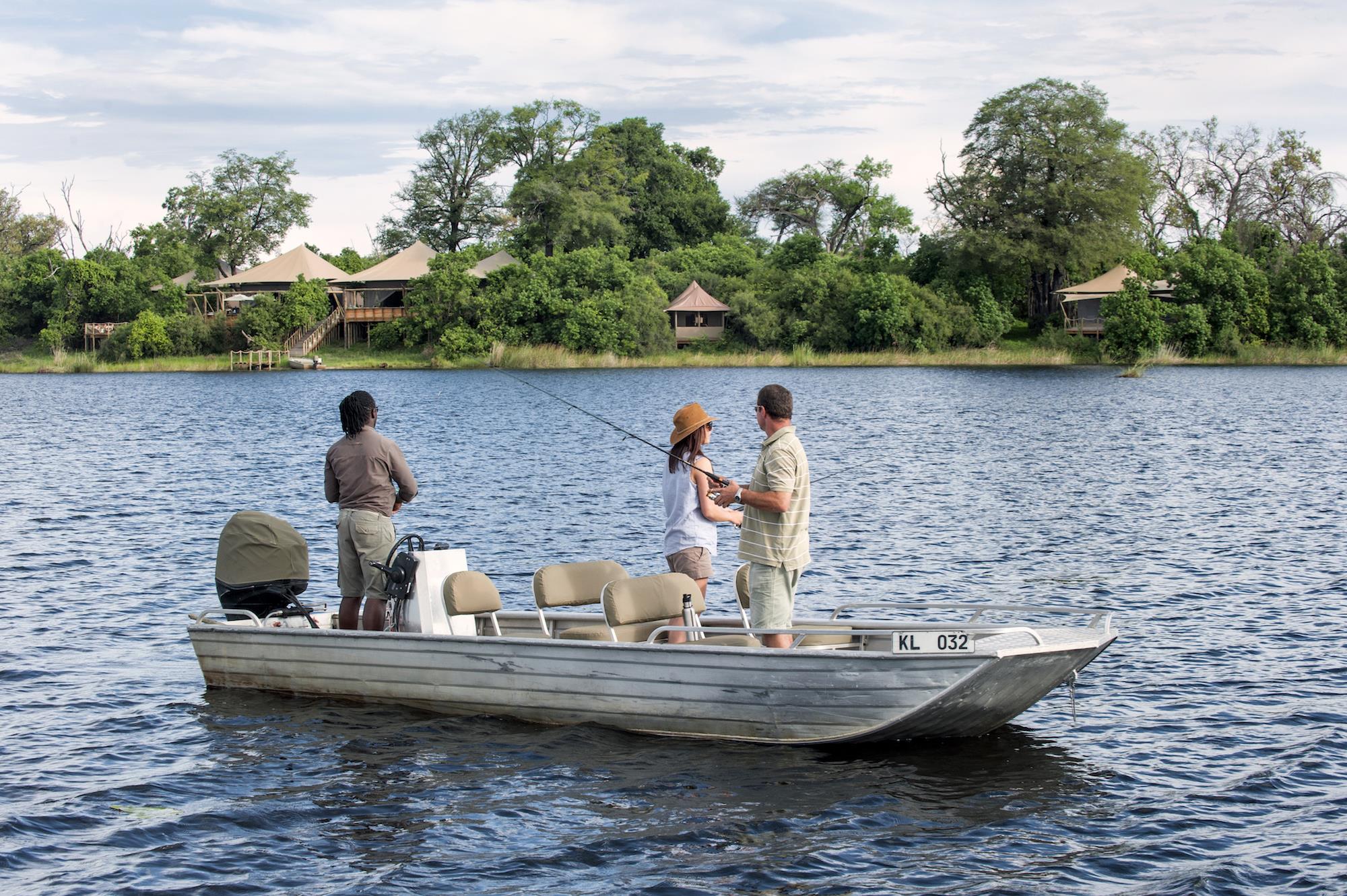 Located on the banks of Kunen River, in the extreme northwest of Namibia, Serra Cafema is one of the most remote lodges in Africa. You are in the habitat of the Himba: one of the last semi-nomadic tribes on earth. Spend some time in their village to get to know them respectfully. The eight thatched villas blended seamlessly with the unexplored landscape. Wilderness Safaris is involved in the protection of sea turtles that nest on the nearby Angolan beaches, where they are vulnerable to local fishermen. In addition to setting up breeding beaches, they follow the turtles in Namibian waters. 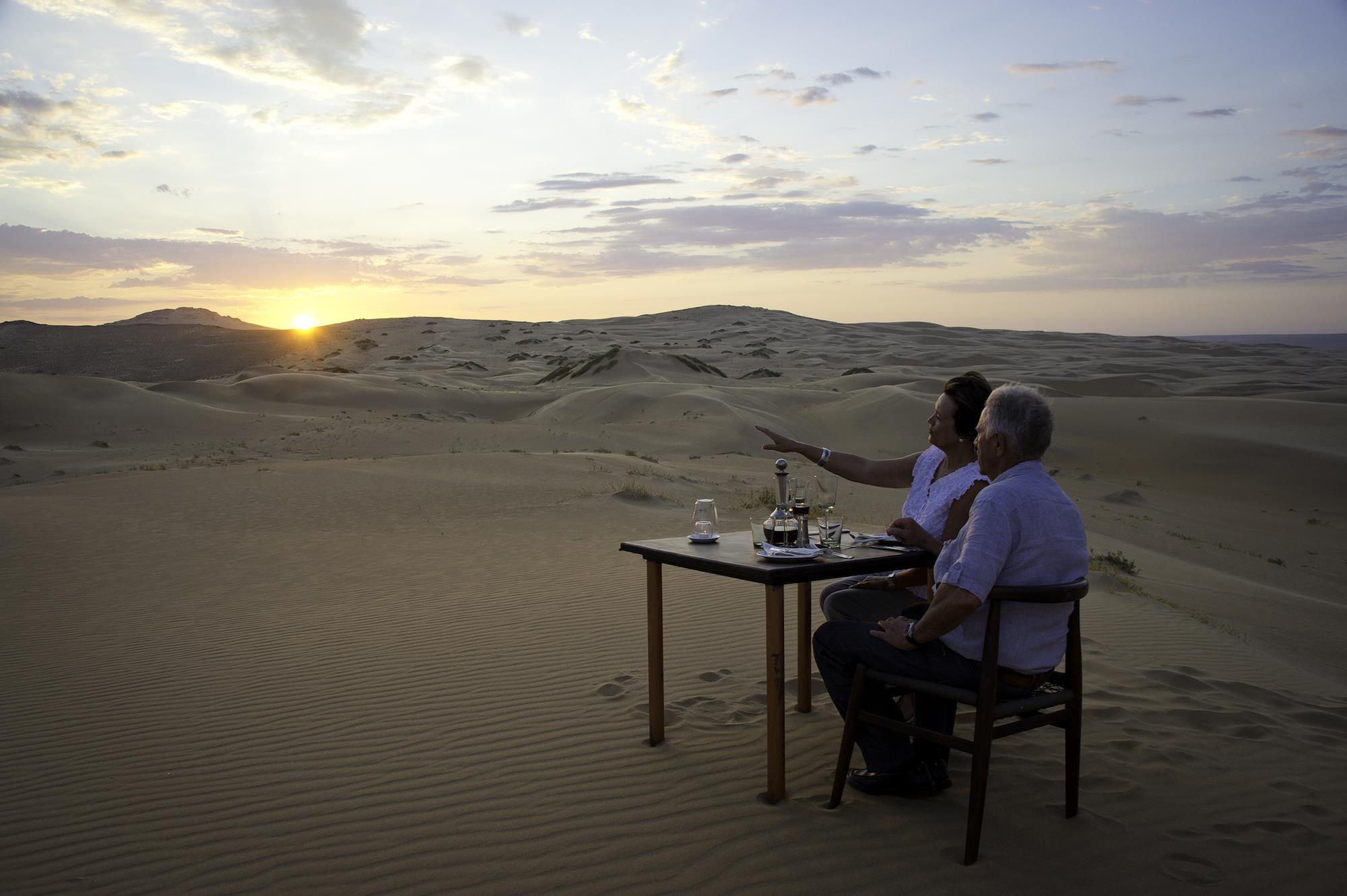 From the spacious tents and expansive decks, look out over the mighty Zambezi River, where hippos, crocodiles and elephants reside. Also keep your eyes open for birds such as bee-eaters and the colorful Schalows tourako. The Toka Leya camp, located in Mosi-oa-Tunya National Park in Zambia, is connected with wooden walkways to limit the footprint in the area. Visit the Victoria Falls that are only 12 kilometers away or spot giraffes, white rhinos and zebras during a safari. 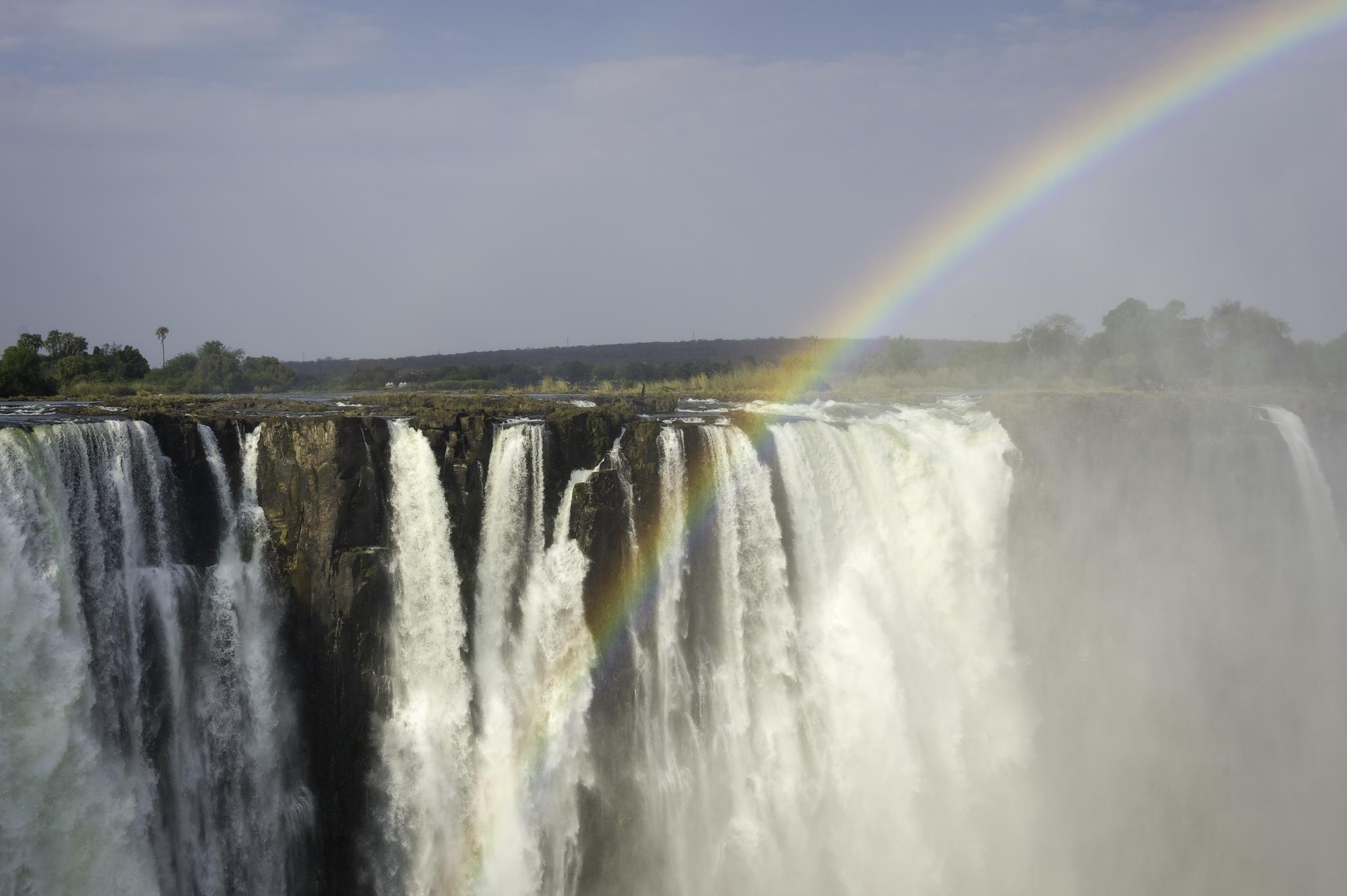 The Victoria falls are only 12 kilometer away from the Toka Leya camp. Photo: Dana Allen / Wilderness Safaris

This camp in Zimbabwe also overlooks the banks of the Zambezi, in the Mana Pools National Park. The remote Ruckomechi camp is shaded by acacia and mahogany trees. Look down at the grazing herd of elephants that regularly hangs around the lodge from the outdoor pool. Wilderness Safaris is committed to the conservation of wild dogs and cheetahs that live in the Zambezi valley. Other animals that you might spot here are lions, buffalos and leopards. 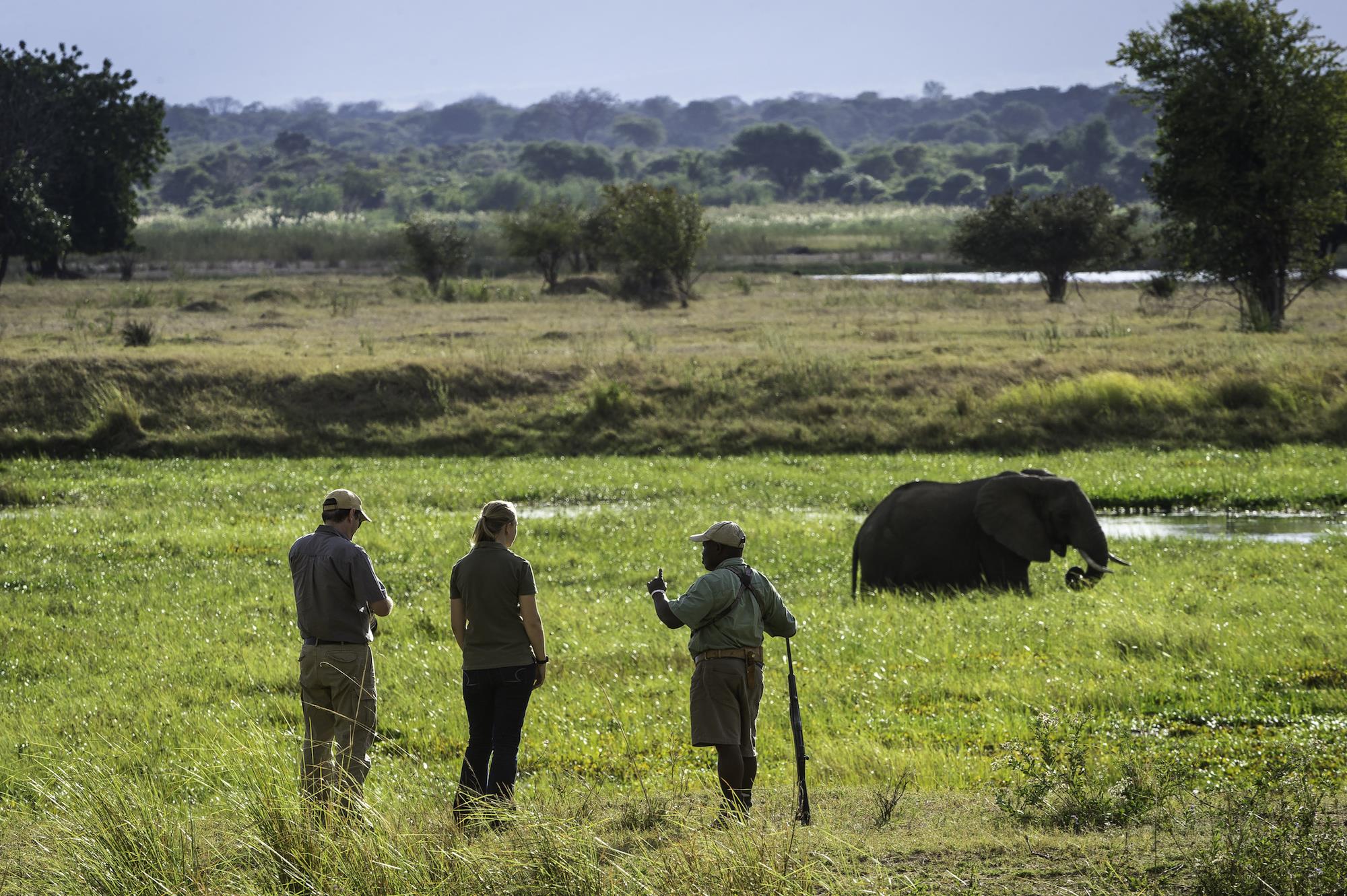 Guests are walking through the Zambezi valley with a guide. Photo: Dana Allen / Wilderness Safaris

Want to see more? Check out all eco camps from Wilderness Safaris here >