Jordan: Stargazing at the Feynan Ecolodge

Hidden away in Jordan's largest nature reserve you'll find the Feynan Ecolodge, one of the most beautiful ecolodges in the world. 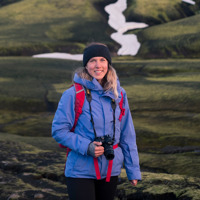 At the end of a bumpy road, deep in the heart of the mountainous Dana biosphere reserve, lies the Feynan Ecolodge: an idyllic lodge in Wadi Feynan, which lights up romanticly in the evening with candlelight. Enter the world of Bedouin in the desert-like Dana National Park, about 200 kilometers from Amman: a green oasis between vast sandy plains.

The remote, solar-powered Feynan Ecolodge was awarded by National Geographic Traveler in 2013 as one of the 25 best ecolodges in the world. Only the bathrooms have electricity, generated by solar panels. In the evening, candles made by local Bedouin women light up the pink walls full of traditional handicrafts. In their own words, the entire 26-room lodge uses less power than a two-room apartment in Amman. 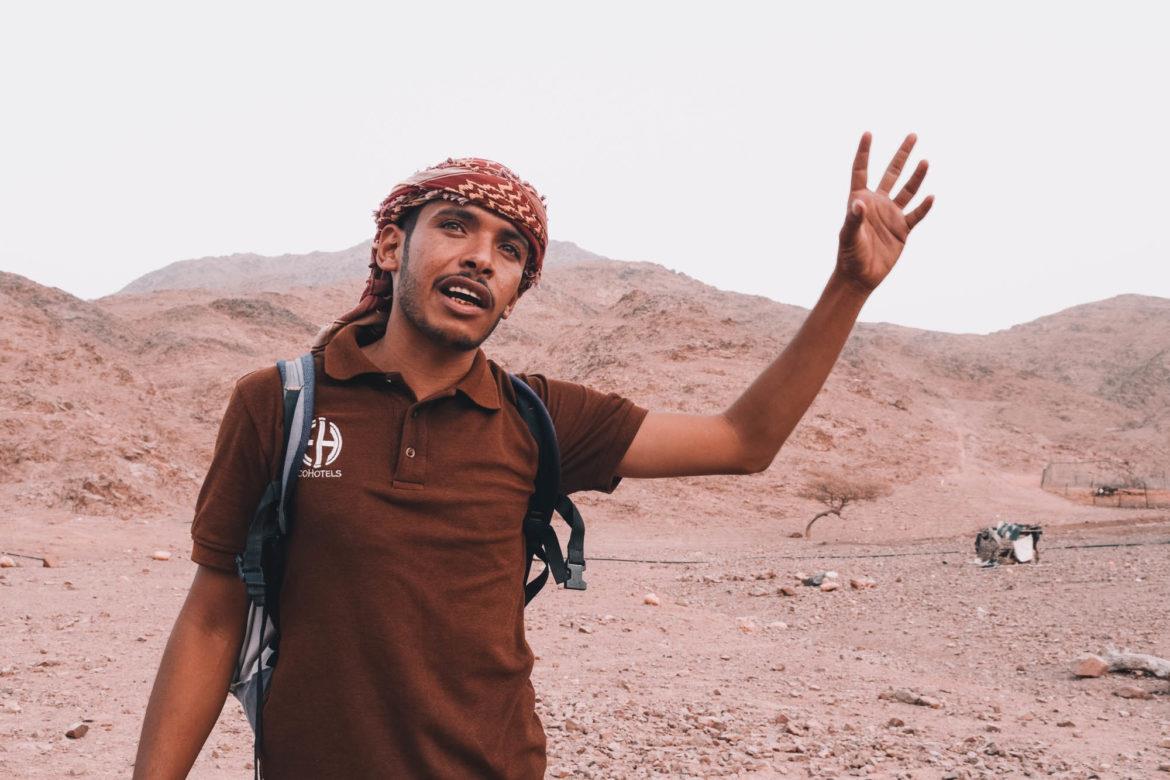 Salah guided us through the Dana nature reserve.

The eco-hotel is owned by the Royal Society for the Conservation of Nature, a Jordanian NGO dedicated to protecting the most beautiful natural landscapes in the kingdom. They protect endangered species in Dana Nature Reserve – the largest reserve in Jordan where more than 50 percent of all the plants and animals in the country live – and try to offer local residents new opportunities. 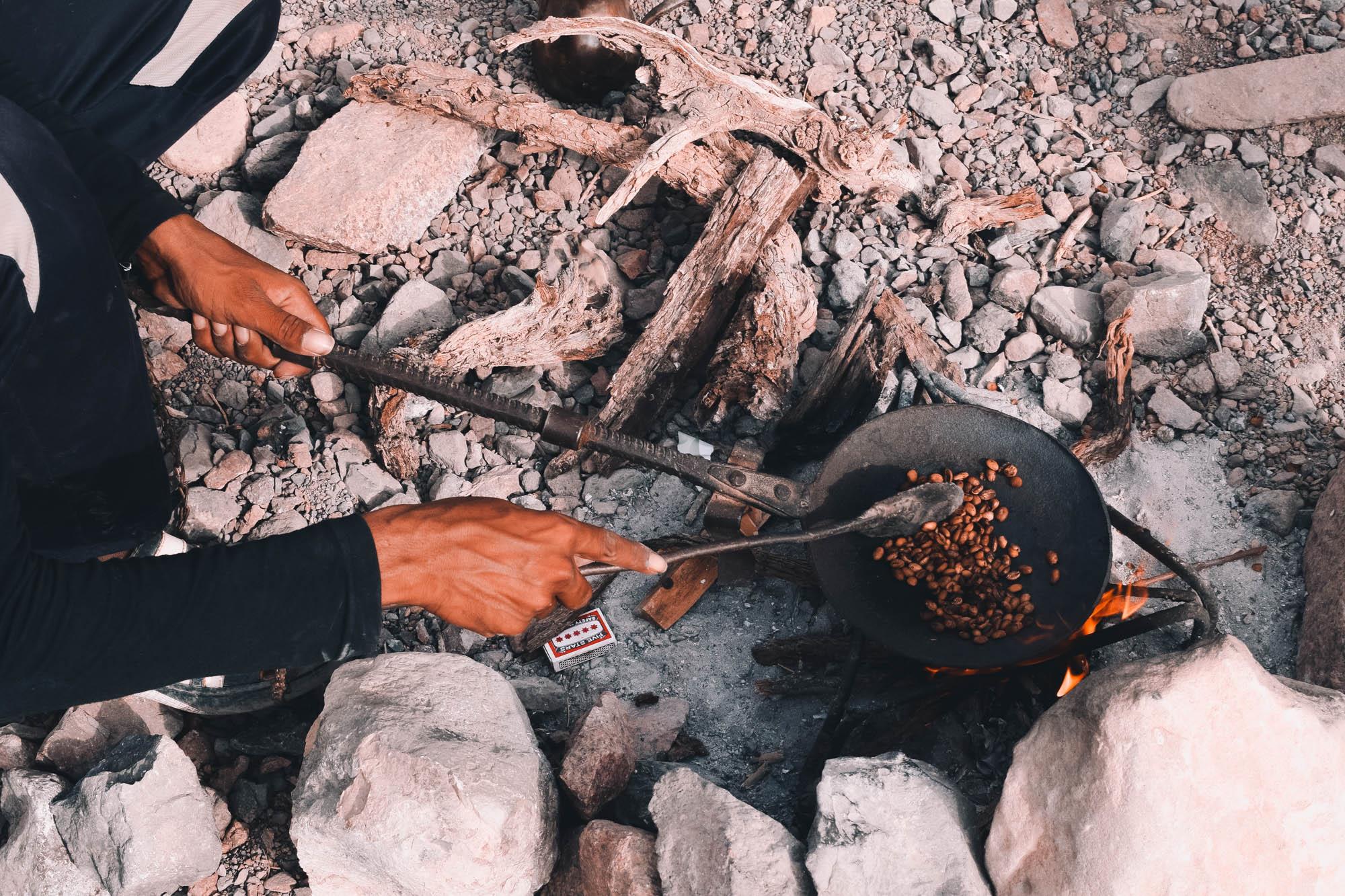 Coffee beans are roasted over the fire.

The area full of sandstone cliffs, where the endangered Nubian ibex, Syrian serin (a yellow bird) and the kestrel live, invites you to go on an adventure. At the end of the afternoon, when the worst heat is over, we go for a cup of tea with a Bedouin family in the nature reserve. 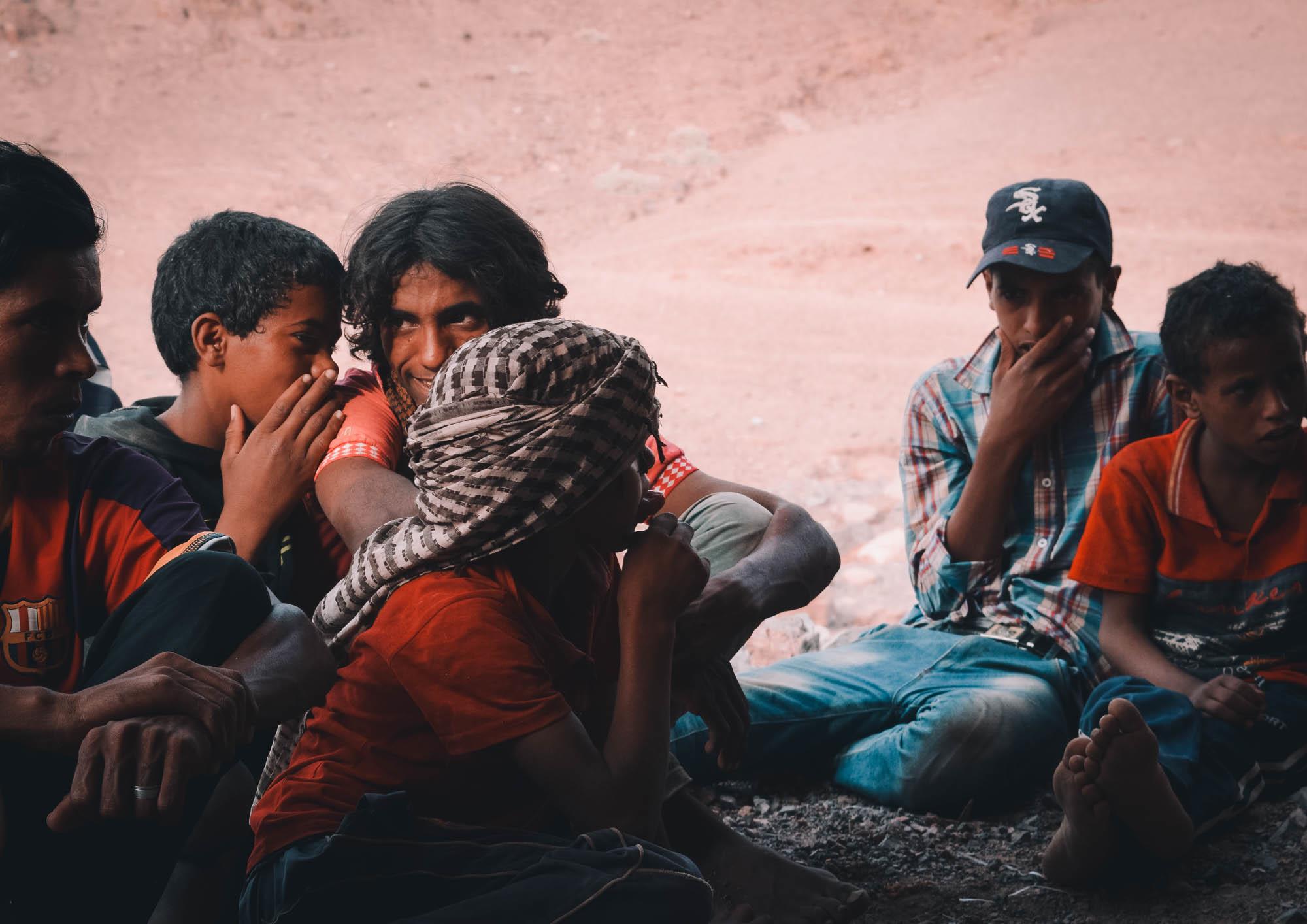 The Bedouin boys are whispering to each other.

There is a heat wave in Jordan when we are visiting and in the middle of the day the temperature rises above 40 degrees. We hang out in the shade of the tents of the traveling nomads. The scent of cardamom fills the open space. ‘The smell of hospitality,’ says guide Salah. 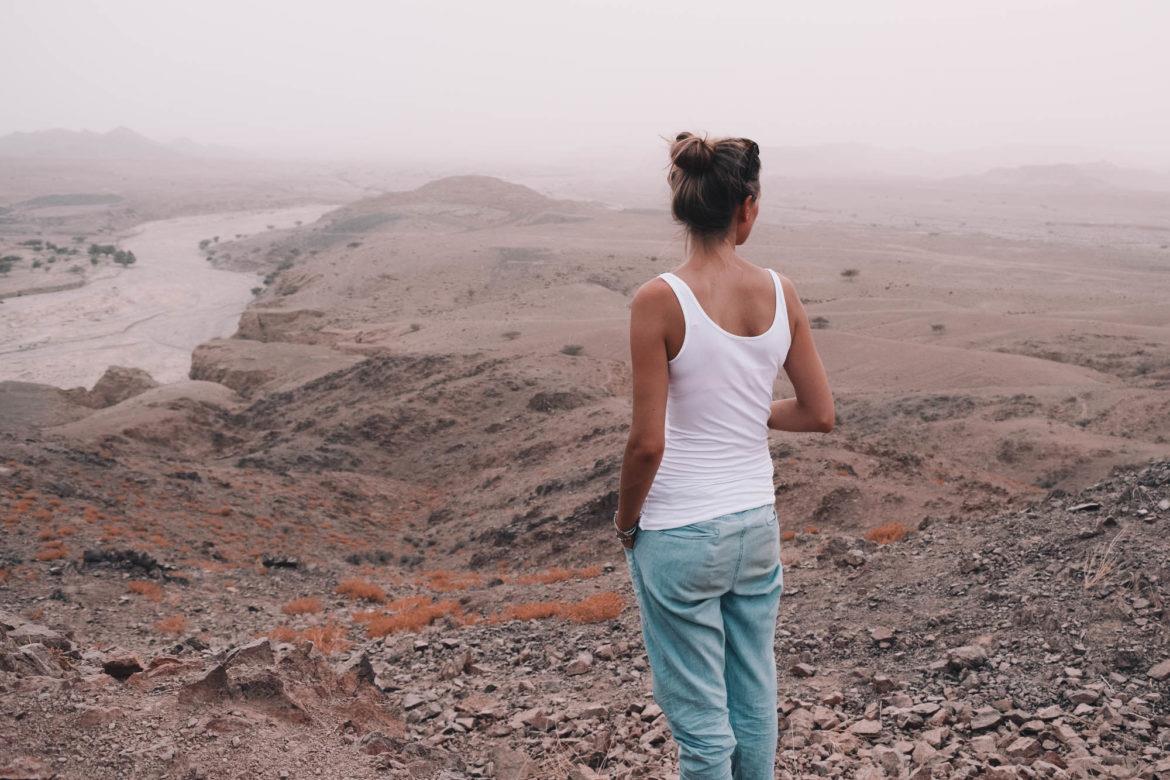 View over a valley in the Dana nature reserve.

We are served Arabica coffee, which is normally stored for special occasions. The beans are baked on the fire, after which they are mashed with a loud, flaky sound, so that all neighbors in the area know that coffee is being prepared. Water is then set up, in which the coffee is cooked. Finally, they grind cardamom that is put in a thermos before the coffee is added. ‘Coffee without cardamom is not coffee for us,’ Salah laughs as he hands me a cup. 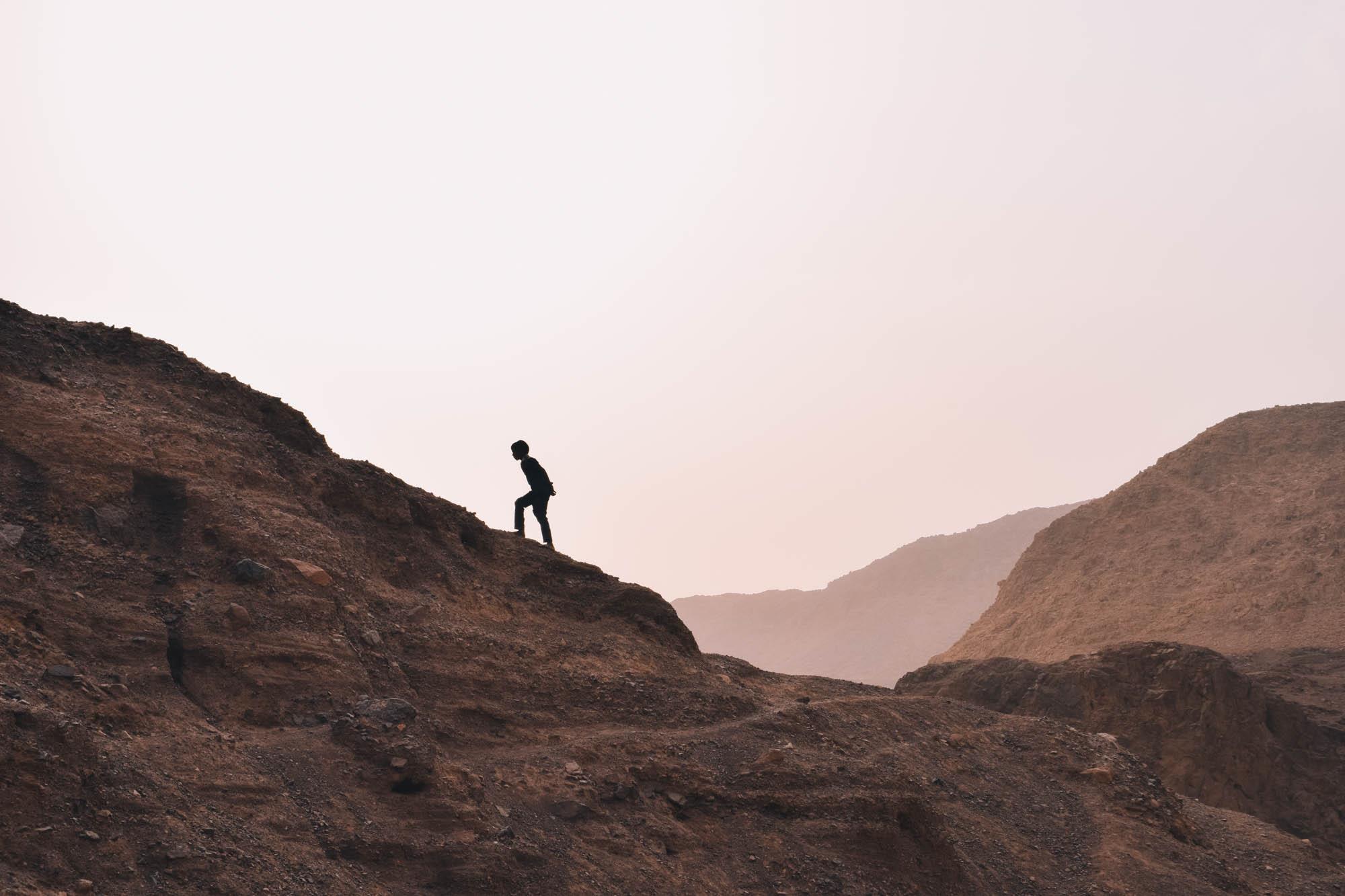 A boy climbs a hill during sunset in Dana nature reserve.

After a sunset hike to the highest peaks of the Dana National Park we go to check out the stars on the roof terrace of the Feynan Ecolodge, which is now romantically lit with candles. Due to the remote location of the ecolodge, you will not be bothered by light pollution. Unfortunately, there is a sandstorm in the Middle East, which hides the clear starry sky behind a layer of dust, while we are here. But it does not make the setting less romantic...