Colorful flowers, loud parades and brightly decorated skeletons on every street corner. I travel to Oaxaca and immerse myself in Mexican culture, searching for the core of this authentic tradition.

Dusk has given way to a pitch-dark sky, which is illuminated by the moon in an eerie yet magical way. I make my way through the candlelit graves. It's late and I'm in a secluded graveyard just outside bustling Oaxaca. A scene I would normally associate with something creepy and scary. However, I am currently experiencing the opposite. My gaze falls on a colorful tombstone decorated with flowers. In the background is the strumming of a guitar and a few graves away there is loud laughter.

I feel the calm and peace as the locals prepare to receive the souls of their deceased loved ones and am overcome with hope. The hope that I have just experienced how the Mexican tradition has still managed to retain its authenticity. A thought that is soon interrupted by a tourist who bluntly sets foot on a tombstone, trying to capture what happened here so peacefully and modestly just  a few seconds ago.

A tradition as old as time

Dia de los Muertos, also known as the Day of the Dead, is a Mexican folk festival that originated in the summer months of the Aztec Empire, more than eight hundred years ago. With the rise of Spanish colonization in the sixteenth century, the indigenous traditions mixed with the Catholic religion and the festival was moved to what we now know as All Saints' Day and All Souls' Day (November 1 and 2).

The celebration still aims to honor the dead, celebrate their lives and recognize that death is part of life. In my opinion a very beautiful way of mourning, in which the Mexicans are convinced that once a year the souls of deceased loved ones travel to the world of the living. Accompanied by true works of art in the form of altars, also called ofrendas, the loved ones are guaranteed an easy return to earth. Think bright orange flowers, colorful flags, photos of relatives and an abundance of food, and the picture is complete! 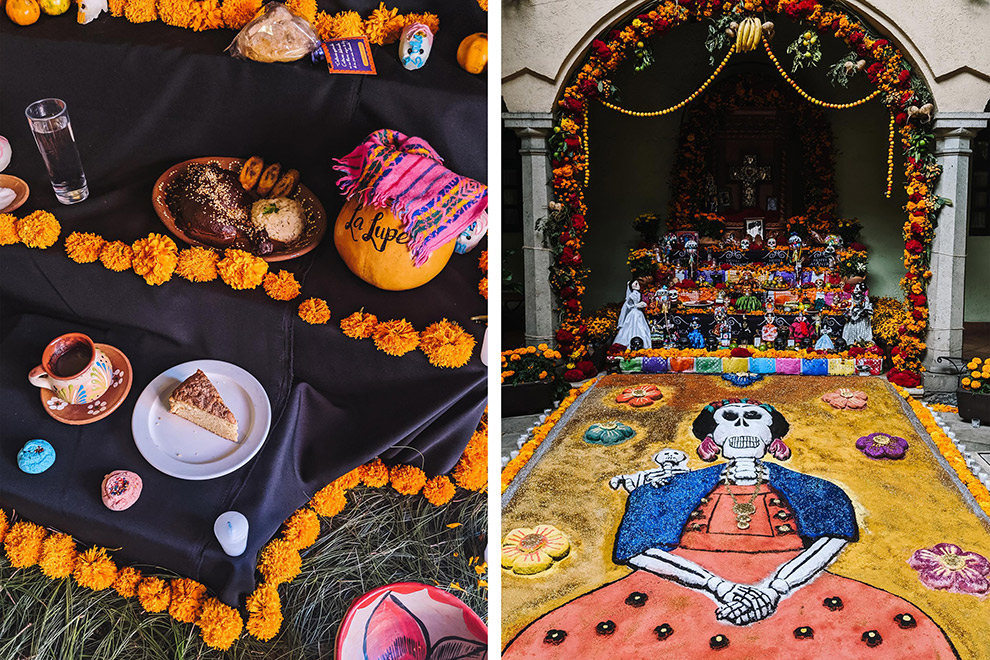 It has not gone unnoticed that this age-old tradition is still going strong today. Just think of the Disney animated film Coco, released in 2017, which not only scored huge viewing figures in Mexico, but was also well received over the rest of the world. On the one hand, this makes the commercialization of this originally traditional festival inevitable. On the other hand, you can also see it as a great opportunity for Mexicans to share their culture with the rest of the world. I am therefore confident that in the cultural heart of Mexico, Oaxaca (wah-ga-kaa), I can experience a piece of this authentic magic and continue my search.

Formerly, the tradition mainly took place indoors, nowadays you can find the carefully decorated altars in many public places such as shops, hotels and restaurants. Not only that. Everywhere I look, my view is dominated by brightly colored decorations. All traditions that contribute to the festive feeling, my camera is working overtime. Streets are decorated with garlands in all colors of the rainbow, from which images have been cut with great precision, also known as papel picado. In combination with the cempazúchitl flower, ranging from deep orange to warm purple, the picture is complete.

Dia de los Muertos in Oaxaca is not only a feast for the eyes, but also for the stomach. Visit one of the many local markets such as Mercado 20 de Noviembre and immerse yourself in the world of Mexican street food. An experience that is not complete without tasting Pan de Muerto and many other culinary delights such as Mole Negro, Chilaquilas and Pozole. One tip: leave the sugar skeletons for what they are, namely offerings for decoration, and don't make the same mistake I did by taking a bite of this super-sweet, so-called treat. 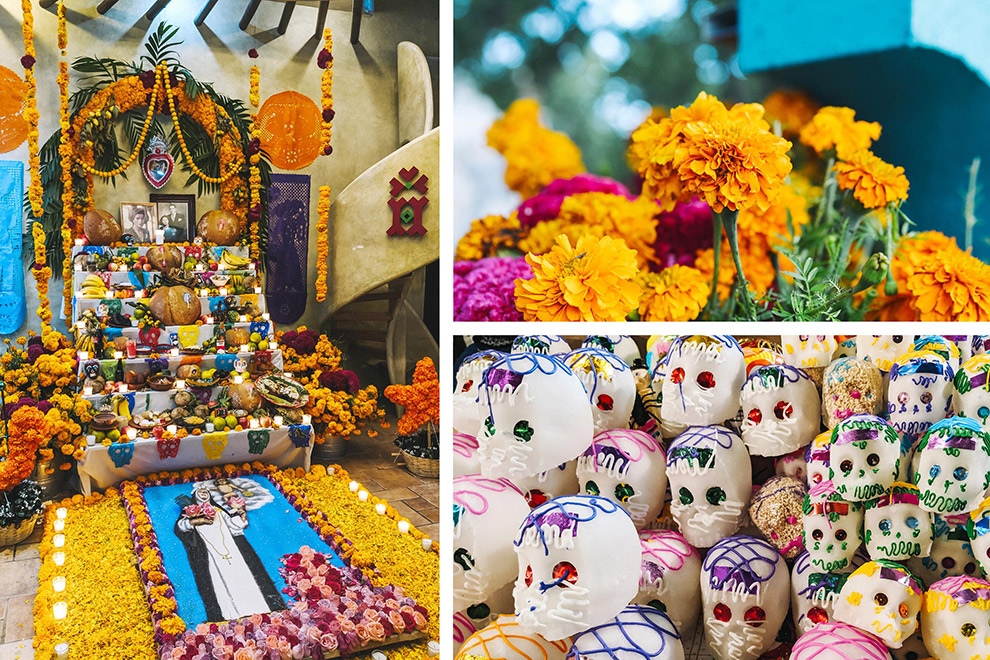 With souvenir stalls and tour operators galore, it's simply impossible to deny that tourism hasn't changed this originally traditional festival. But does this mean it has lost its authenticity? I dive deeper into my quest and begin a broad daylight walk through the local cemetery Panteon General. Two older ladies are walking in front of me, each with a floral bouquet in their hands. Further on, a paint can is opened and a grave is dusted. Guitars are tuned and tequila is poured. As the colored flags sway above me, I close my eyes and find myself in that Mexican living room for a moment, surrounded by offerings, relatives and music. Dreaming about a tradition that is more than just a feast for the eyes.

We all know them: Halloween outfits with face painted skeletons. You will also find these costumes in abundance in Oaxaca and as a tourist you can have your face painted on the spot. A misunderstanding that I want to get out of the way is that Dia de los Muertos is the Mexican version of Halloween. The confusion is understandable, as the multi-day festival kicks off on the evening of October 31. For the Mexicans, however, this first evening is all about refurbishing and decorating graves, already preparing for the visit of their deceased loved ones. In search of that piece of tradition, I leave the face painting behind and go to a cemetery in nearby Xoxocotlan, better known as Xoxo (cho-cho), on Halloween night. 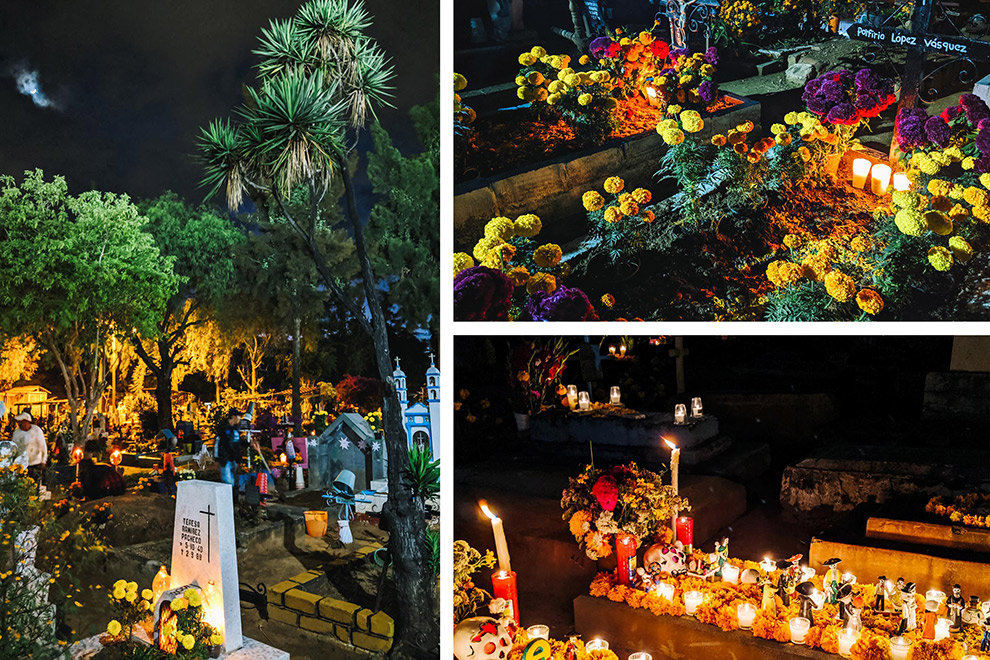 It was to be expected that I am not only among locals in these cemeteries. Earlier in the day in downtown Oaxaca I was overrun by guides trying to entice me for their cemetery tour later that evening. As appealing as it might have sounded, the decision to go out on my own turned out to be a good one. I move through the winding paths at my own pace and stop at one impressively decorated grave after another. Surrounded by groups of people making music, couples in deep conversation and individuals praying in peace and quiet, I reflect on the fact that this is what I am so desperately looking for. A moment in which I don't feel like a tourist and I am completely absorbed in Mexican culture. 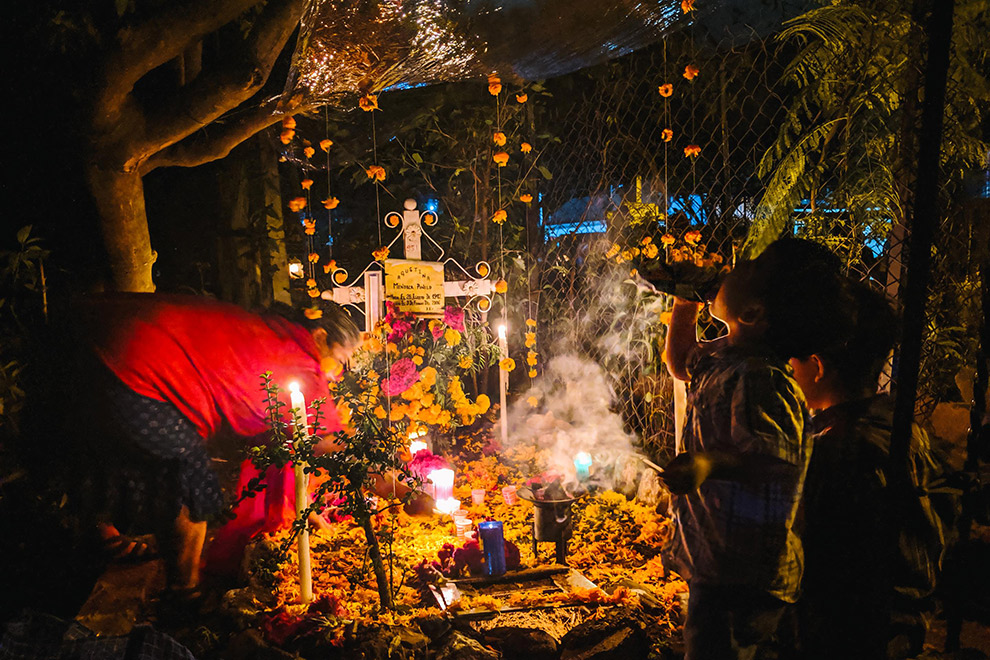 From modest gatherings in the cemetery to large parties on the street. It's my last night in Oaxaca and I'm stuck. The overwhelming sound of drums echoes through the streets. The people around me are yelling and dancing as if the evening has no end. With the same spontaneity that got me into this parade, I decide to surrender and literally go with the flow. Oaxaca has plenty of opportunities to party during Dia de los Muertos. Both organized and spontaneous. With live music and parades well into the night, squares such as Plaza de Santo Domingo and Alameda de León are guaranteed to get you in the festive mood. One thing is certain, the Mexicans know better than anyone how to celebrate not only life, but also death. 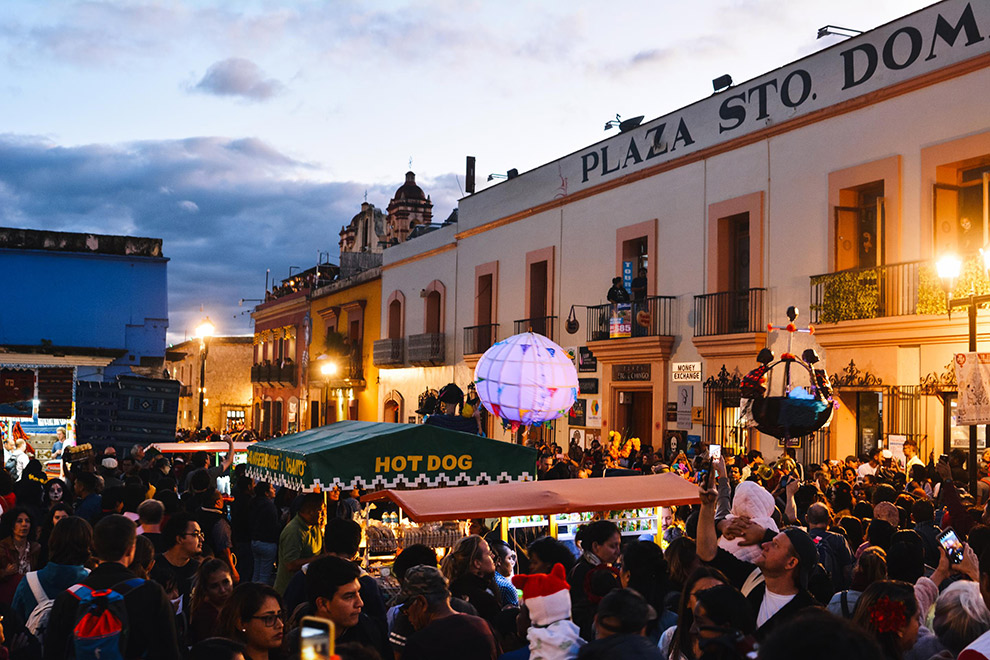 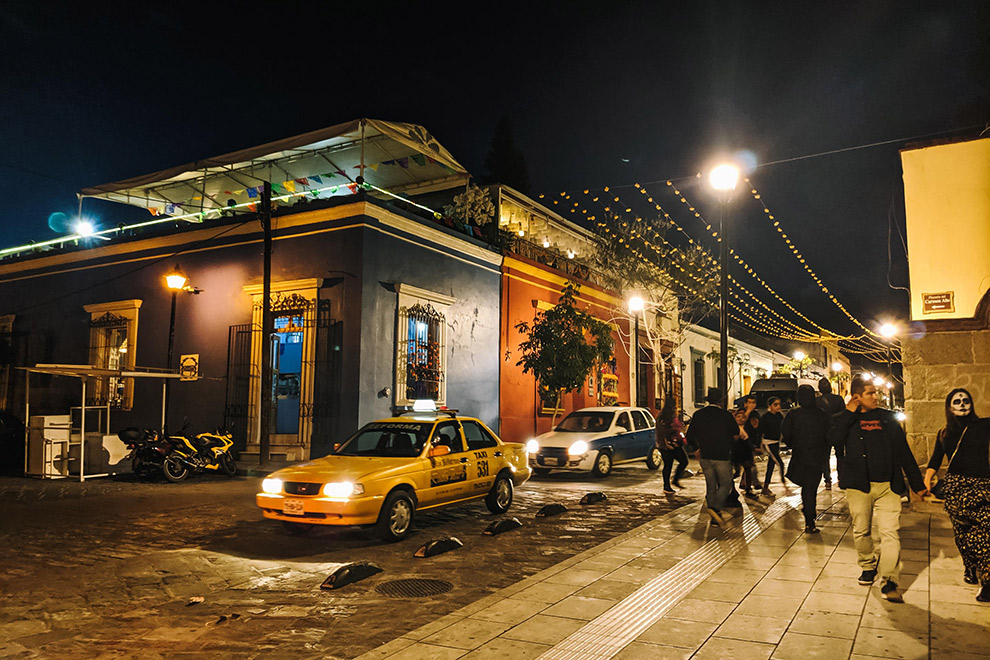 He who seeks will find

Satisfied, I get on the bus and continue my journey through Mexico. While reminiscing about what I've experienced in the past three days, I go looking for the answer to that one question. The fact that tourism has made its entrance in this originally traditional festival is irreversible. I can't deny that I regularly had to bend over between the selfie sticks with some frustration. However, I have come to the realization that you can make it as authentic as you want. By making conscious choices, you are guaranteed to be rewarded with a once-in-a-lifetime experience, which I personally wouldn't have missed for the world! Be curious, but have respect for tradition and Mexican culture and who knows, you might also experience the magic of Dia de los Muertos, as the Mexicans have known for centuries. 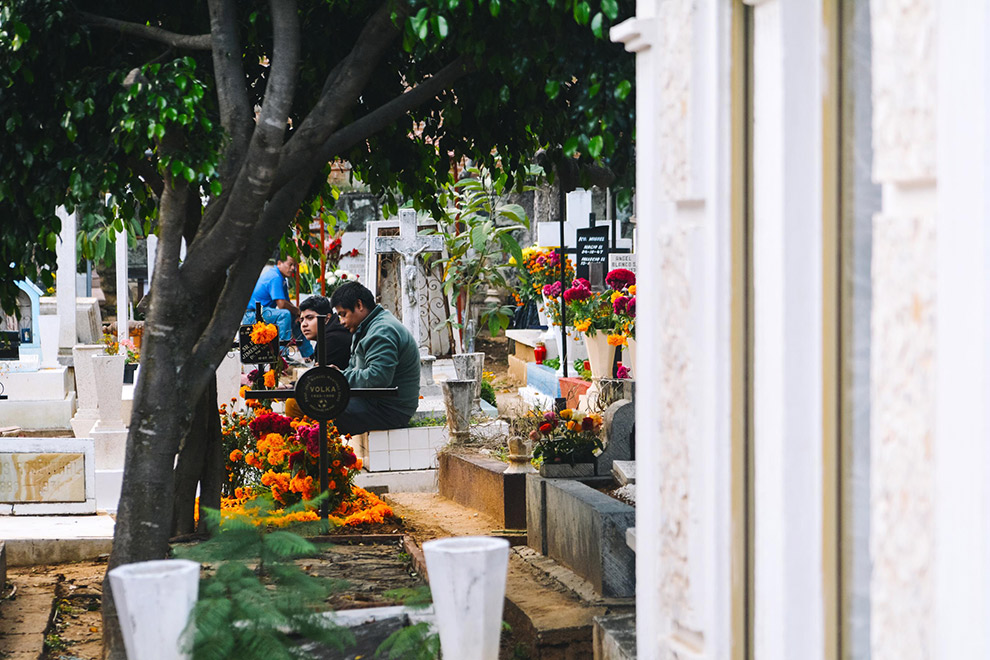 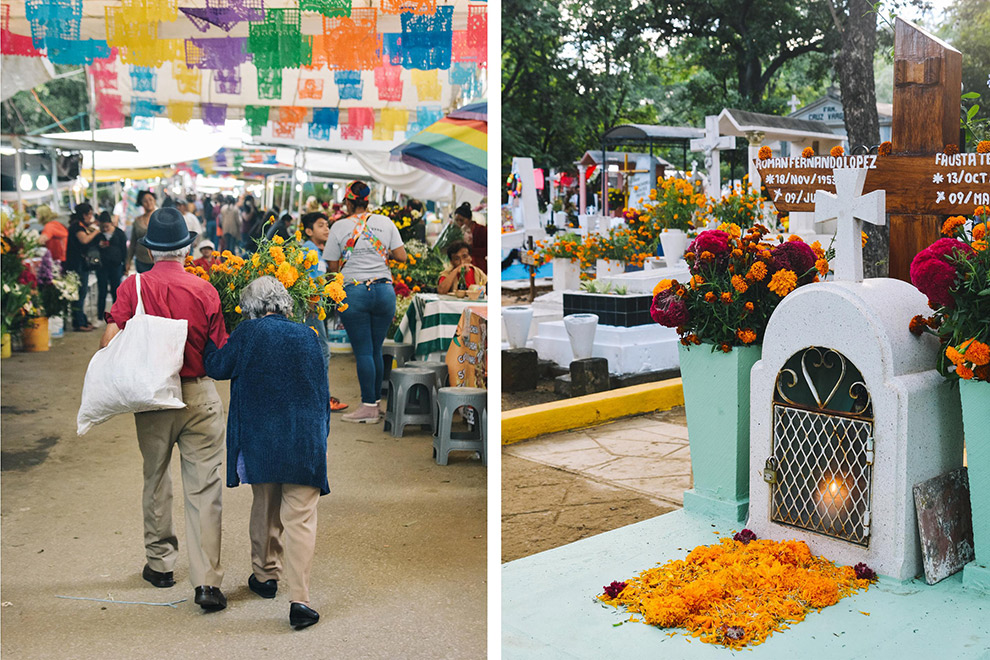